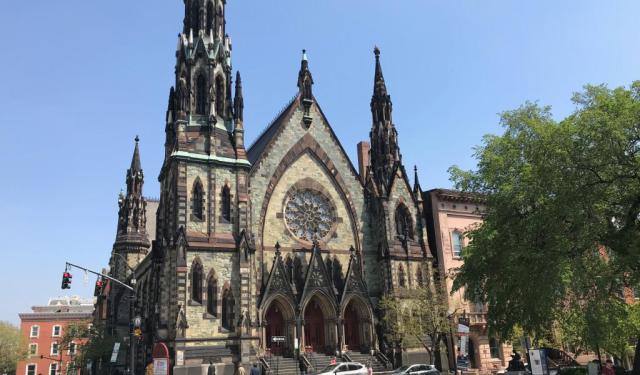 There's no better way to witness Baltimore's rich history than by going to see its many wonderful buildings and other architectural sights. This tour includes Mount Vernon Place United and a historic district featuring houses built in the early 19th Century. Don’t miss the opportunity to see these places on your trip to Baltimore.
Image Courtesy of Wikimedia and JGHowes.
How it works: Download the app "GPSmyCity: Walks in 1K+ Cities" from iTunes App Store or Google Play to your mobile phone or tablet. The app turns your mobile device into a personal tour guide and its built-in GPS navigation functions guide you from one tour stop to next. The app works offline, so no data plan is needed when traveling abroad.

The Mount Vernon Place United was established in 1872. This historic United Methodist church was built in a Norman-Gothic style. It's considered by American Institute of Architects as the most important architectural structure in Baltimore, and is listed on the National Register of Historic Places. All are welcome for Sunday worship each week at 11am.
Image Courtesy of Flickr and eli.pousson.
2

The Washington Monument and Museum at Mount Vernon Place was built in 1815 by Roberts Mills. It was the first monument ever erected to honor George Washington. At 178 feet or 54 meters tall, it offers wonderful views of Baltimore from its high vantage point.
Image Courtesy of Wikimedia and ScottyBoy900Q.
3

3) Basilica of the Assumption (must see)

Image Courtesy of Wikimedia and Basilica1.
Sight description based on Wikipedia.
4

The site for the "new" building was selected and some designs were submitted before the American Civil War. The cornerstone for the building, under Frederick's new design, was not laid until 1867. At a cost of more than $2 million, Baltimore City Hall is built largely of brick with the exterior walls faced with white marble. The marble alone, quarried in Baltimore, cost $957,000. The segmented dome capping the building is the work of Baltimore engineer Wendel Bollman, known for his iron railroad bridges. At the time of its construction, the cast iron roof was considered one of the largest structures of its kind.
Image Courtesy of Marylandstater.
Sight description based on Wikipedia.
5

The Baltimore Trust Company Building is a wonderful 34 story building that was constructed in 1929. It is considered a “cathedral of commerce”, with a modern aesthetic and Gothic architectural forms. This old skyscraper has a rich ornamental design, including a number of animal sculptures located beneath the flagstaffs.
Image Courtesy of Wikimedia and Andrew Bossi.
6

The tower originally had a 51 ft (16 m) Bromo-Seltzer bottle, glowing blue and rotating. Weighing 20 tons (18.1 tonnes), it was lined with 314 incandescent light bulbs and topped with a crown. The bottle was removed in 1936 because of structural concerns.
Image Courtesy of Wikimedia and Andrew Bossi.
Sight description based on Wikipedia.
7

The entire site is properly illuminated, and of course, in Poe style, the best time to visit is after dark.
Image Courtesy of Wikimedia and Midnightdreary.
Sight description based on Wikipedia.
8

Pascault Row is a national historic district in Baltimore. It consists of a range of eight 3 1⁄2-story dwellings. It is Baltimore’s last remaining example of early-19th-century townhouses, and illustrates the transition between the Federal and the early Greek Revival periods. They are attributed to William F. Small, at that time employed in the architectural office of Benjamin Henry Latrobe.

It was added to the National Register of Historic Places in 1973.
Image Courtesy of Wikimedia and Frederic C. Chalfant.
Sight description based on Wikipedia.