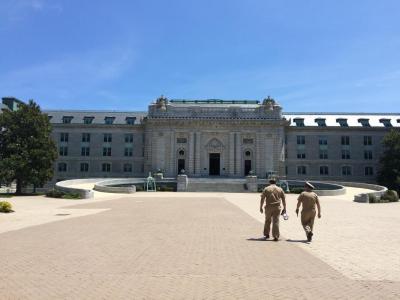 Bancroft Hall at the United States Naval Academy is the largest single dormitory in the world. Named after former Secretary of the Navy, George Bancroft, the hall is home for the entire brigade of 4,000 midshipmen, and contains some 1,700 rooms, 4.8 miles of corridors, and 33 acres of floor space, plus all the basic facilities that midshipmen need for daily living.

Bancroft Hall was designed by Beaux-Arts architect, Ernest Flagg, and its central rotunda and first two wings were built in 1901–06. Over the intervening years it has been expanded to encompass eight wings of five stories, each numbered 0-4. In addition to the midshipmen rooms, Bancroft Hall houses offices for the Commandant of Midshipmen, six battalion officers, six battalion chaplains, 30 company officers and their senior enlisted leaders, a barbershop, bank, travel office, a small restaurant known as "Steerage," textbook store, general store, laundromat, uniform store, cobbler shop, the USNA Band, the USNA branch of the United States Postal Service, a gymnasium, spaces for extracurricular activities, and full medical & dental clinics, as well as small optometry and orthopedics clinics. There are rooms in Bancroft dedicated to each Academy graduate Medal of Honor recipient in the Navy or Marine Corps.
Image by Preservation Maryland on Flickr under Creative Commons License.
Sight description based on wikipedia