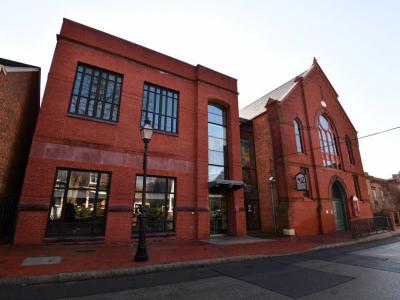 The Banneker-Douglass Museum is dedicated to preserving Maryland's African American heritage, and is named for the famous free African American astronomer and mathematician, Benjamin Banneker, and the leader of the Abolitionism movement, Frederick Douglass. Fittingly, it is housed in the former Mount Moriah African Methodist Episcopal Church, the historic two-and-a-half-story, gable-front brick building constructed in 1875, which initially served as the meeting hall for the First African Methodist Episcopal Church, originally formed in the 1790s. In 1896, the building was remodeled.

Eventually, the property was leased to the Maryland Commission on African-American History and Culture, becoming the state's official museum for African-American history and culture. In 1984, after the museum had opened, a two-and-a-half-story addition was added.

It also runs exhibitions depicting black life in Maryland, African and African American art, and covering the issues of slavery and change in the education system of the U.S. The museum regularly organizes workshops, lectures, performances and educational programs on a yearly basis.

The facility also serves as the state's official repository of African American material culture, and has its own library and archives. The Banneker-Douglass Museum's Gothic Revival-style building has been listed on the National Register of Historic Places since 1973 and is within the boundaries of the Colonial Annapolis Historic District.
Image Courtesy of Flickr and Maryland GovPics.
Sight description based on Wikipedia.