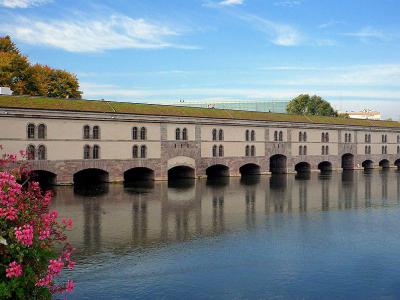 The Vauban Dam is a bridge, weir and defensive system erected in the 17th century on the River Ill in Strasbourg. It was a 17th century engineering marvel built according to the plans laid out by Marquis Vauban, the leading French military engineer of the time. At that time, it was known as the Great Lock, although it does not function as a navigation lock in the modern sense. Today it serves to display sculptures and has a viewing terrace on its roof, with views of the earlier Covered Bridge and Petite France quarter. It has been classified as a Historical Monument since 1971.

The dam was constructed from 1686 to 1690 in pink Vosges sandstone and its principal defensive function of the dam was to, in the event of an attack, raise the water level of the River Ill and thus flood the land south of the city, making it impassable to the enemy. This defensive measure was deployed in 1870, when Strasbourg was besieged by Prussian forces during the Franco-Prussian War, and resulted in the complete flooding of the northern part of the suburb of Neudorf.

The dam has 13 arches and is 120 meters (390 ft) in length. Within the structure an enclosed corridor links the two banks and a lapidarium serves to display ancient plaster casts and copies of statues and gargoyles from Strasbourg Cathedral and Rohan Palace. Three of the arches are raised to permit navigation, and the corridor is carried across these by drawbridges. The roof was rebuilt in 1965-66 in order to construct the panoramic terrace. Admission to the dam and terrace is free, and they are open daily from 9 am to 7:30 pm.
Image Courtesy of Wikimedia and Claude TRUONG-NGOC.