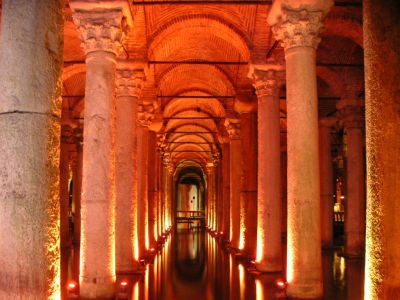 The Yerebatan Sarnıcı or the Basilica Cistern translates as “Cistern Sinking Into Ground” and is one of the many ancient cisterns that are present in the city of Istanbul. Located near the Hagia Sophia, on the peninsula of Sarayburnu, it was built in the 6th century AD by the Byzantine emperor Justinian the first. The name is derived from the Stoa Basilica upon which it was built. The Basilica was said to be built by Ilias and housed many structures and gardens. Historical texts state that over seven thousand slaves were involved in the construction of the Cistern.

The cistern used to provide a filtration system for the water for the Great Palace of Constantinople and surrounding buildings on the historic First Hill. After the Ottoman conquest, it continued to provide water to the Topkapi Palace and continues to do so in modern times. It has undergone many restorations, both by Ottoman emperors and the Roman emperors before them.

Today, the cistern is open to visitors and houses many historical relics like the Medusa columns and triumphal arches. The former can be viewed in the cistern's North West corner.

Why You Should Visit:
Great (spooky) atmosphere that makes for magnificent photos and the preservation of history is done remarkably.
Right next to Hagia Sophia, Topkapi Palace, and the Blue Mosque, so easy to fit it in along with the other attractions.

Tip:
Watch your step as some parts (near Medusa heads) can be extra slippery, and take a jacket especially if you get cold easily.