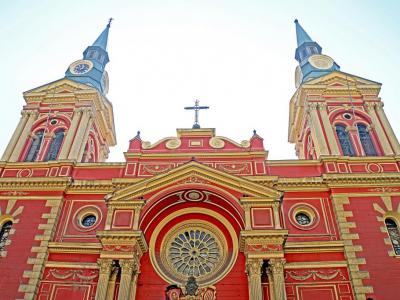 Basilica de la Merced is a great religious sight in Santiago and a proof that not all relics associated with Jesus Christ are stored in the Vatican. The basilica is said to house a sliver of the cross on which Jesus Christ was crucified, which was reportedly donated to Chilean mercenaries by King Alfonso XIII of Spain. This has made the basilica a major attraction, along with its splendid, neo-Renaissance architecture and a religious museum inside.

The church was built originally in 1566 by Mercedarians, but destroyed by an earthquake; a new building was raised in its place in 1736. The church boasts a spectacular interior with a Bavarian Baroque pulpit and the sixteenth-century image of Virgin Mary on the altar. The church museum displays the life of the Merced order and holds some truly exceptional pieces from the Easter Island, including a rare rongorongo tablet. Despite the presence of an on-site museum, masses are served in the basilica every day.

Why You Should Visit:
The street presence is bold but the interior is balanced, much resembling the grand halls of some French renaissance palace.
Beautiful deus! Incredible timber floor! And, if you're lucky enough, you can hear the charming bell.
Image Courtesy of Wikimedia and Dennis Jarvis.
Sight description based on Wikipedia.