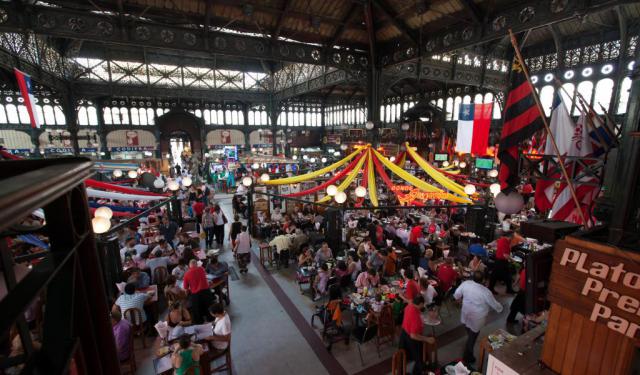 The pedestrian zones in downtown Santiago are full of life and replete with stores and street vendors suiting for both, those keen on fancy shopping in air-conditioned malls and those in favor of open-air markets (called mercado or feria).

There are several main thoroughfares in the center of Santiago, including Calle Huérfanos – running west down from Cerro Santa Lucía, and Paseo Ahumada – stretching north from the Alameda towards the Mapocho River and Mercado Central.

Paseo Ahumada is a four-block street visited yearly by over 2 million people. Families and individuals, locals and tourists are drawn here by the abundance of street vendors and performers, numerous boutiques and department stores, fast food outlets, ice cream parlors, cafés and more.

Mercado Central – Santiago's Central Market – is a bustling fish market whose wrought-iron structure was shipped from England in the 19th century, and whose restaurants now are a major attraction.

Another key local market – Feria Santa Lucia – is dedicated to handicrafts. Here you will find a whole world of cheap and fun little trinkets; a cool place to walk around searching for indigenous and locally made souvenirs.

To explore these and other major shopping and dining spots in downtown Santiago and to catch the best bargains, follow this self-guided walking tour.
Image Courtesy of Wikimedia and Almonroth.
How it works: Download the app "GPSmyCity: Walks in 1K+ Cities" from iTunes App Store or Google Play to your mobile phone or tablet. The app turns your mobile device into a personal tour guide and its built-in GPS navigation functions guide you from one tour stop to next. The app works offline, so no data plan is needed when traveling abroad.

The pulsating heart of Santiago is definitely the bustling Central Market which displays the richness of the country in terms of food, vegetables and fruits. Right in the middle of the market is an iron statue that exhibits its artistic element. The market is a testament to the wealth of Chile and a visitor have a lot to choose from, from food to handicrafts. Like any marketplace, the Central Market can be quite noisy, lively and entertaining as well, and if one does not mind crowds, would have a wonderful time here.

The best time to visit this place is during lunch hour, as you will get to experience the full splendor of the market, as well as sample some of the delicacies on offer, including fish marinade, ceviche or zucchini. Mariachis are present in various corners of the market, and their sweet music brings order to the noise, as they serenade visitors and locals.

The market's metal structure was originally made in England and then moved to Chile and assembled here in 1872 to serve as the National Exposition venue before it was transformed into a market. It is now a symbol of art and life in the city of Santiago and is open every single day except election days.

Why You Should Visit:
To grab a bite and buy your authentic Chilean souvenirs (e.g. textiles, alpaca scarfs) for a very good price.

Calle Huerfanos, or Huerfanos Street, has a history that dates at least to the early 18th century. Originally, the street was named Alley of the Stables because it was home to the stables of Don Mateo de Toro y Zambrano. Later, it was called La Moneda Real due to the fact that the first minted coins in Chile were created in a house on this street.

The moniker Calle Huerfanos, which means "orphans street," came after the Hospicio de Los Pobres was founded. The building was used to care for women who suffered from cholera, and then later their children who were left behind.

Visitors to Santiago can easily walk Calle Huerfanos as the most notable blocks are entirely pedestrian. Tourists will see a number of shops and eateries. There are outdoor vendors selling their wares and architecture that shows the changes in Santiago over the years.

Away from the pedestrian area of Calle Huerfanos are a number of notable places. Santa Lucia Hill, Quinta Normal Park and Brazil Square are all easily reached from Huerfanos Street.
Image Courtesy of Wikimedia and Sfs90.
3

Calle Bandera (formerly Calle de La Bandera ) is a street in the center of the city of Santiago, which begins in the south from Libertador General Bernardo O'Higgins Avenue and continues north to the Mapocho River.

The name of this street is due to Pedro Chacón y Morales, a well-known merchant from Santiago who in 1817 had his flags shop on the street known as "Atravesada de La Compañía". Pedro Chacón, who was the grandfather of national hero Arturo Prat Chacón, raised a Chilean flag every time there was a victory for the independence forces, and the street became known as "the street of the flag."

The neighborhood around Calle Bandera was home to the Chilean literary bohemian in late 19th century and early 20th century. There were many bars, restaurants, and cabarets which were frequented by writers, poets, and artists such as Pablo Neruda, Juvencio Valle, Diego Muñoz, Alberto Valdivia, Rubén Azócar, Alberto Rojas Jiménez, and Tomás Lagos.

Today the street houses important historical buildings and financial institutions in the country including Pre-Columbian Art Museum, Palace of the Courts of Santiago and Building of the former National Congress. Since December 2018, Calle Bandera became a pedestrian street from the underpass of Libertador General Bernardo O'Higgins Avenue to the north.

If you’re into thrifting, Calle Bandera is the place to be. You will find there countless second-hand, vintage and thrift stores. The street is also covered by beautiful painted artworks and is a popular Instagram spot in the city.
Image Courtesy of Wikimedia and ProtoplasmaKid.
4

Paseo Ahumada is a four-block-long pedestrian-only street used by two and a half million pedestrians each year. Here, you'll find historic buildings, shops, and restaurants. The highlight of a walk along Paseo Ahumada is watching busy Santiagans go about their daily life. Immerse yourself in city culture as locals travel from their offices, grab lunch, and go shopping.

Street musicians and performers often entertain passersby. You'll see ballroom dancers, folk dancers, and musicians of all kinds. Street vendors hawk their goods; this is an excellent place to shop for trinkets and souvenirs. Paseo Ahumada is lined with trees, providing shade and respite on this busy street.

The Banco de Chile building is one of the historic buildings found along Paseo Ahumada. The 1926 building is a gorgeous example of Beaux-Arts-style architecture. Classical columns create an imposing effect, while the ironwork gives the building an ornate look.

As you walk, stop at one of the popular mote con huesillo stands. You'll enjoy this popular local drink made with a sweet peach punch and wheat.
Image Courtesy of Wikimedia and ProtoplasmaKid.
5

The Santa Lucia Market or Feria de Santa Lucía is a traditional arts and crafts market located in central Santiago. At this market you will find good value souvenirs and handicrafts, many of which are locally handmade. Typical items sold here are the famous alpaca wool, native instruments and all sorts of decorative figures. It is also interesting for those who do not have the chance to travel outside of Chile, as Peruvian and Bolivian goods are also sold at this market. Visiting the market is an excellent way to discover Chile’s folkloric culture.

Among the stalls you will find handcrafted shoes, boots, rugs, bags, woollen clothes and jewellery; there’s also lamps and lights, wooden instruments, plaques, souvenirs and leather goods. It’s an impressive array and worth a wander. Definitely head here to look for your trip memento and gift needs. Right across the road is Cerro Santa Lucia; park and art all in one.
Image Courtesy of Flickr and Jorge Láscar.