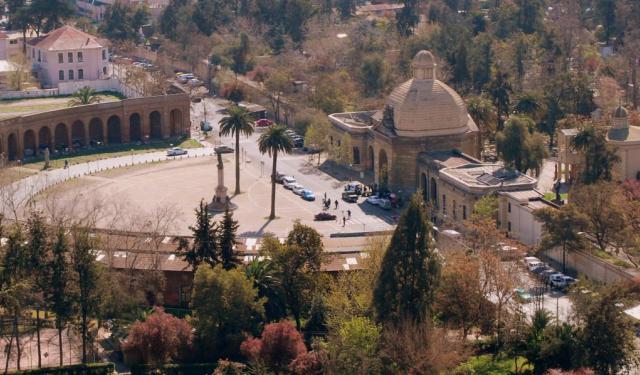 The Franciscan Church and Convent of Recoleta – built in 1843, this Neoclassical complex with Tuscan influence was declared a National Monument in 1973. The bronze fountain in front of it was the focal point of Plaza de Armas until 1838.

Patronato Street Market – known for its clothing stores: mostly small, independent shops. The gastronomic options here are also diverse: from Lebanese falafel restaurants to Korean chicken diners. If you seek a break from the typical Latin American grub, Patronato is the place to go.

Parroquia de Santa Filomena (Parish of Santa Filomena) – is a Neo-Gothic church built in 1884; named after Santa Filomena, a saint and a martyr. La Vega Central Market – the city’s largest fruit and vegetable market offering the best choice of fresh produce – from locally-grown avocados, tomatoes and blueberries to imported Peruvian corn. Foodies will also enjoy the many local restaurants – small, pop-up eateries with a few tables and chairs outside.

The Dominican Church and Convent of Recoleta – declared a National Monument in 1974; inspired by the design of the Basilica of Saint Paul Outside the Walls in Rome. Cerro Blanco (White Hill) – a place where indigenous festivals, workshops and ceremonies take place. General Cemetery of Santiago – one of Chile’s largest and most important cemeteries. Marxist president Salvador Allende and other prominent figures are among those buried here.

For a closer acquaintance with the most notable sights of Recoleta, take this self-guided walking tour.
Image Courtesy of Wikimedia and Jorge Andrades Barriga.
How it works: Download the app "GPSmyCity: Walks in 1K+ Cities" from iTunes App Store or Google Play to your mobile phone or tablet. The app turns your mobile device into a personal tour guide and its built-in GPS navigation functions guide you from one tour stop to next. The app works offline, so no data plan is needed when traveling abroad.

1) Church and Convent of the Franciscan Recoleta

In the seventeenth century, dedicated Christians of Santiago, who wished to stay away from secular pleasures and lead a life of sacrifice, would find refuge in the historic Franciscan Recoleta Convent. During the colonial era, travelers stopped here for compulsory prayers prior to heading up north of the country. Recoleta also has attracted many followers of the Franciscan friar Andresito who died here in 1853 and was attributed with miraculous powers.

The earthquake of 1730 did a lot of harm to the church and the convent, both of which were restored completely in 1811 and 1848, respectively, courtesy of Fermin Vivaceta, who also added decorations to the buildings for the sake of pleasing future generations. The restored church features neoclassic style and has a central nave and two lateral vaulted ones. The altar has been made in a Baroque style of unique, polychromatic wood.

The church, dedicated to the Virgin of the Summit, has an outstanding Baroque image of the Virgin featured on the altar. The church and convent of Franciscan Recoleta was declared a national monument of Chile in 1973.

Image Courtesy of Wikimedia and Nd0806.
2

If you ever need new clothes, while in Santiago, consider Patronato Street Market a prime destination. Specialized in clothing and accessories, the market comprises labyrinths of roads lined with stalls, outlets and shops, sometimes crowded, particularly on weekends, but overall exciting to explore.

Patronato is rightfully regarded as one of the most cosmopolitan spots in Santiago where the local culture collides and blends with the Asian and Middle Eastern. The tremendous choice of goods on display caters to any style, fabric or color preference and, what's more appealing, at bargain prices - equivalent to 2-10 euros apiece. All of this make Patronato a definite must-visit place.

The Parish of Santa Filomena is located in the Patronato district of the Recoleta municipality of Santiago. It emerged as a result of the persecution of non-profit organizations in the wake of “Rerum Novarum” encyclical, issued by Pope Leo XIII on May 15, 1891, which addressed the condition of the working class and their exploitation.

Named after a Christian martyr and saint, the church was originally built in 1884 by Eugenio Joannon, using donations made by some of the wealthiest families of Santiago. The construction was supervised by a priest, Ruperto Marchant.

The beautiful, Neo Gothic edifice forms a remarkable sight, with a grand exterior and interior decorated with several magnificent paintings, some which arrived from France and create a spectacular chiaroscuro effect. It was initially used by the congregation of the Josephite fathers who came to Santiago from Italy.

Despite the damage inflicted on the building by the many earthquakes that have hit Santiago since the 19th century, it still stands. The most destructive earthquake took place in 1985. After all the necessary repair had been done and the church been restored to its original beauty, it was declared a national heritage site in 1995.
Image Courtesy of Wikimedia and usachino.
Sight description based on Wikipedia.
4

La Vega Central Market is a lively market with more than 500 stalls selling fresh fruit, meat, seafood and various merchandise. The structure was built in 1895, and then expanded in 1916.

Those who don't want to shop should still stop by the market to have an experience that is uniquely Chilean. Thousands of people pass through La Vega Central Market every day. Visitors will see tourists and locals alike loading up their bags with traditional food.

Shoppers should bring their own bag to the market. It is very crowded, so a cross-body bag that can be easily held in front of the body is recommended. Tourists can also stop at a small restaurant in the market where they can find Chilean and Peruvian food along with pizza, Thai cuisine, seafood and ice cream.

La Vega Central Market is located on Davila Baeza in the Recoleta region of Santiago.
Image Courtesy of Wikimedia and Mx. Granger.
5

The Church and Convent Recoleta Dominica have been around since the 18th century. The Dominican congregation arrived in Chile in the 16th century and 200 years later, in the lands donated to the congregation by the authorities, established the Convent of Recoleta Dominica, one of the most important ones in terms of religious observance of that period.

The construction of their first house of prayer, very simple in design, started in 1753. The initiative to build a new church came in 1853, when a new altar for the old church was commissioned. The project was designed by Italian architect Eusebio Chelli, but it was Manuel Aldunate and Avaria who effectively led the work to completion and designed the dome crowning the central nave. In 1886-1888 the convent was remodeled to its present appearance.

Today, the complex represents an architectural and historic monument, and accommodates the Museum of Decorative Arts, the Dominican Historical Museum, and the Recoleta Dominica Heritage Library.
Image Courtesy of Wikimedia and Felipe Restrepo Acosta.
6

Cerro Blanco is a hill and historical landmark. This geographic feature rises 89 metres (292 ft) above the surrounding terrain and covers a surface area of 28 hectares (69 acres). It is bordered by Recoleta Avenue on the east, Santos Dumont Avenue on the south and La Unión Street on the north. The latter street separates the hill from the Cementerio General de Santiago.

Stones extracted from a quarry on Cerro Blanco were used in the construction of some historical buildings in Santiago, including the Santo Domingo Church. The place is called Cerro Blanco (meaning "While Hill") because the white clothes wore by the Domenicans who own the land of the hill during the colonial time.

Completed in 1840, the Church of the Small Wineyard is located at the lower southeast flank of Cerro Blanco and was consecrated to Our Lady of Montserrat.
Image Courtesy of Robert Cutts.
Sight description based on Wikipedia.
7

This eighty-five hectare expanse is a final resting place for all but two Chilean presidents as well as many notable Chilean citizens, including political leaders and poets. The area abounds in spectacular mausoleums and tombs, some of which were crafted by the greatest sculptors in Chile, and is surrounded by gardens, lanes, leafy trees and beautiful sculptures. The monument to a suffering sculptor, by Carrier Belleuse, is found at the entrance to the cemetery, with more elaborate tombs lying further afield. Victims of the 1863 Iglesia de la Compania (Church of Companion) are buried here.

A memorial to the late president Salvador Allende makes this cemetery one of the top visited sites in the country. Reportedly, Allende committed suicide during the coup of 1973 staged by General Augusto Pinochet. The coup led to the establishment of Junta regime. After Chile returned to democracy in the 1990s, the remains of Salvador Allende were exhumed from the Santa Ines Cemetery and placed at the General Cemetery of Santiago. Also, there is a memorial to those who disappeared during Pinochet's rule.

The land on which the cemetery is laid out was set aside by Chilean independence leader and founding father Bernardo O'Higgins in 1819, after the country proclaimed independence. To date, there are over two million burials on the ground, making it the one of the largest burial sites in Latin America.
Image Courtesy of Wikimedia and Felipe Restrepo Acosta.