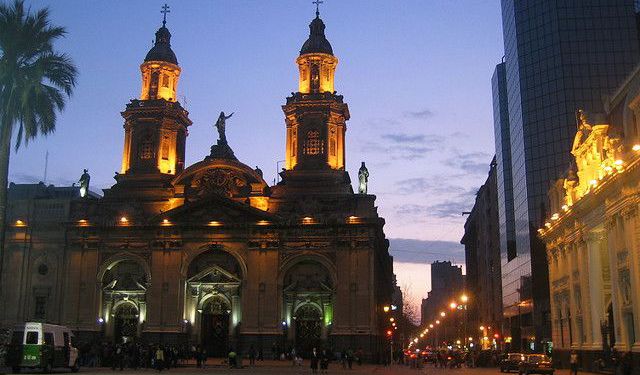 The San Francisco Church – originally constructed in 1613. The adjacent convent is currently a museum open to the public, featuring colonial art and period religious artifacts. The Church of Our Lady of Grace – commonly known as the Church of St Augustine, is the second oldest church in Chile, originally built in 1608. Inside there is a legendary wooden carving of Jesus Christ, called Cristo de Mayo.

Basílica de la Merced – built in 1795, this maroon and white-trimmed church is now a national monument. It houses a small museum that contains religious art and artifacts from Chile’s famous Easter Island. The Santo Domingo Church – the current structure is one of many upgrades of the first church built back in the 1500s. The temple boasts Neoclassical design, and its brick towers show the influence of a Bavarian baroque style.

The Santiago Metropolitan Cathedral – a stunning Neoclassical sanctuary that took 52 years to build with numerous updates; the most recent of them took place in the early 1800s. The Church of Santa Ana – a National Monument of Chile since 1970. The first church on the site was built in 1586.

If you wish to take a closer look inside some of the oldest and most prominent historic churches and cathedrals of Santiago, take this self-guided walking tour.
Image Courtesy of Flickr and kyle simourd.
How it works: Download the app "GPSmyCity: Walks in 1K+ Cities" from iTunes App Store or Google Play to your mobile phone or tablet. The app turns your mobile device into a personal tour guide and its built-in GPS navigation functions guide you from one tour stop to next. The app works offline, so no data plan is needed when traveling abroad.

The church and the convent of San Francisco form the oldest religious sight in Santiago and the former symbol of the city. The colonial complex preserves a lot of memories and holds great spiritual importance for Santiaguinos.

The church, whose history is tightly intertwined with that of the city, was originally built in 1554 to accommodate the Virgen del Socorro. However, an earthquake reduced the first building to dust and the present day structure is a replacement built on the same spot later on. Its walls, a testament to the old age, have been modified and reinforced several times over the years.

A lot of ornamental additions have been made to embellish the structure, including a beautifully decorated wooden roof – a magnificent sight to behold. There is also an annexed convent which showcases spectacular colonial art, including silverware, tapestry, figurines and paintings, which, if combined, could easily have won a prize as the largest and finest collection of colonial art in Chile. There are also many religious and other artifacts that were once used by the monks, and a wonderful collection of silverware, carvings and dozens of paintings in the rear rooms, which depict the life at the time of Saint Francis.

Why You Should Visit:
Full of Spanish paintings and other art forms in the unique style of the time. The attached museum also contains a vast array of extremely old ecclesiastical items and artworks which can't be photographed so the only way to see them is to go there. Well worth the small entry fee, but note that there is very little information in English.

Tip:
The peaceful internal garden is a cool oasis on a hot day, with chickens and peacocks roaming about, and stunning tropical flowers.


Image Courtesy of Wikimedia and Jaime Soto Ceura.
Sight description based on Wikipedia.
2

2) Church of Our Lady of Grace

This catholic temple in downtown Santiago belongs to the religious order of Saint Augustine. It is the second oldest church in Chile, built in 1625, and was later remodeled into Neoclassical and Baroque styles.

The wooden figure of Christ, located inside the church, is an attraction in its own right and draws thousands of pilgrims each year from all over the world because of a legend associated with it. According to this legend, during an earthquake that hit Santiago de Chile in 1647, the figure of Christ, that had traditionally a crown of thorns on its head, got shaken and the crown slipped down to the neck. An individual, who was there at the time, attempted to return the crown to its original place, on the head, at which point the face of Christ started bleeding and the whole ground began to shake. They took it as a sign and since then the crown has never been touched again; it remains on the neck of the statue to this very day. Other than that, the church is noted for its architectural splendor and is open to all members of the public, religious and non-religious.
Image Courtesy of Flickr and Jonas de Carvalho.
3

Basilica de la Merced is a great religious sight in Santiago and a proof that not all relics associated with Jesus Christ are stored in the Vatican. The basilica is said to house a sliver of the cross on which Jesus Christ was crucified, which was reportedly donated to Chilean mercenaries by King Alfonso XIII of Spain. This has made the basilica a major attraction, along with its splendid, neo-Renaissance architecture and a religious museum inside.

The church was built originally in 1566 by Mercedarians, but destroyed by an earthquake; a new building was raised in its place in 1736. The church boasts a spectacular interior with a Bavarian Baroque pulpit and the sixteenth-century image of Virgin Mary on the altar. The church museum displays the life of the Merced order and holds some truly exceptional pieces from the Easter Island, including a rare rongorongo tablet. Despite the presence of an on-site museum, masses are served in the basilica every day.

Why You Should Visit:
The street presence is bold but the interior is balanced, much resembling the grand halls of some French renaissance palace.
Beautiful deus! Incredible timber floor! And, if you're lucky enough, you can hear the charming bell.
Image Courtesy of Wikimedia and Dennis Jarvis.
Sight description based on Wikipedia.
4

This religious edifice in the downtown area of Santiago is a solid proof that the most beautiful structures can also be the simplest. Its architectural marvel lies in simple lines, dominated by two towers at the top, featuring the Bavarian Baroque style. The church shows a mixture of architectural elements and artistic diversity that may be another reason why it looks so beautiful. The outside appearance reflects neoclassical influence with a touch of Creole. The church was built by Juan de los Santos Vasconcellos, who laid its foundation in 1747, before Joaquín Toesca took over the construction in 1796.

The interior is quite spacious and adorned with several paintings from the colonial era. Visitors can learn much about Santo Domingo in whose honor the church is named. The building has withstood several earthquakes and fires which partially damaged the structure; the interior had to be refurbished, though. In 1951, the church was declared a national monument of Chile.
Image Courtesy of Wikimedia and Carlos yo.
5

The Catedral Metropolitana was built between 1748 and 1800. This neoclassical cathedral has baroque features, including gilded columns and gorgeous, inspiring frescos. There has been a church standing on the site since the city was founded in the 1500s. The previous churches were all damaged by fire and earthquakes. Even the current cathedral has had structural damage and repairs made due to earthquakes.

Italian architect Joaquín Toesca was responsible for the gorgeous architecture of this important cathedral. The interior is stunning. The central nave is full of statues on the walls. The altar is magnificently ornate with marble and deep blue lapis lazuli. The stained glass is intricate and beautiful. Artist Ignazio Cremonesi painted the ceiling in 1906.

The seats and pulpits are meticulously carved from wood. The floor is decorated with thousands of tiny tiles in an intricate black and white pattern. The crypt houses the remains of Chilean archbishops. The lost tomb of Diego Portales, one of Chile's founding fathers, was discovered under the altar in 2005 and moved into the crypt.

Visitors will also find a museum adjoining the church. The Museum of Sacred Arts is home to many interesting religious artifacts. Silver craftsmanship by Jesuit priests includes a silver tabernacle and silver lectern. The museum also has a lovely courtyard.

Don't miss the Sacred Chapel, designed in 1846 by Eusebio Chelli.

This is one of the most impressive and beautiful cathedrals in Chile. Its interior is reminiscent of Italian churches. Spend some time here to soak up all the ornate details.

Arrive early in the day as the church gets quite busy. An information board at the entrance to the cathedral outlines important statues and interesting features.

The Church of Santa Ana is a Catholic church in downtown Santiago. It is located at the northwest corner of Cathedral and San Martín streets. The church was declared as a National Monument of Chile in 1970, within the category of Historic Monuments. Santa Ana metro station is named after the church.

The church was designed with a Latin cross plan. The front facade features eight Doric columns. A three-stage tower rises from the southernmost ridge line, which runs parallel the front facade.
Image Courtesy of Wikimedia and Carlos yo.