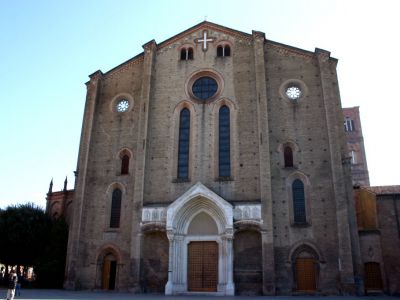 San Francesco is a church in Bologna, northern Italy. It was begun in 1236 by Marco da Brescia and his brother Giovanni, a Franciscan monk. Despite its Romanesque façade, it is one of the best example of French Gothic style in Italy. This is manifest in the interior, which has a nave and two aisles, in the apse with corridor, in the high vaults divided into six sections with ogival arches, and in the use of buttresses. The church is home to the monuments of the jurist Accursius and his son Francesco, Odofredus and Rolandino dei Romanzi.
Image by Giovanni Dall'Orto on Wikimedia under Creative Commons License.
Sight description based on wikipedia

This sight is featured in a self-guided walking tour of Bologna, Italy within the mobile app "GPSmyCity: Walks in 1K+ Cities" which can be downloaded from iTunes App Store or Google Play. Please download the app to your mobile phone or tablet for travel directions for visiting this sight. The app turns your mobile device to a personal tour guide and it works offline, so no data plan is needed when traveling abroad.