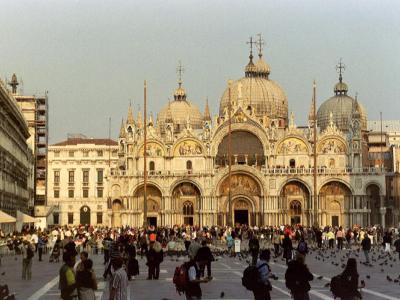 By far the main draw for tourists visiting Venice is the Basilica di San Marco. It was built in 832 AD to house the remains of the city’s patron, Saint Mark. The holy man’s body was brought from Alexandria, Egypt by two Venetian merchants who smuggled it concealed in the barrels of pork meat, which they rightly regarded the Muslim guards would never touch. According to legend, the night the body arrived in the lagoon, St Mark was greeted by an angel, saying, “Peace be with you Mark, my Evangelist. Here shall your body rest”. Over the centuries, this legend has inspired many works of art.

200 years later, a sumptuous temple was built upon the foundations of an earlier church, and was consecrated when St Mark’s body was interred beneath the high altar. The new basilica was modeled after the celebrated Church of the Apostles in Constantinople. To enhance its opulence, the structure was subsequently clothed in marble and mosaics depicting scenes from the Old and New Testaments, as well as the lives of Christ, Virgin Mary and St Mark himself.

Many of the mosaics were later retouched or remade, as artistic tastes changed and the damaged mosaics had to be replaced, so the ones currently in place represent 800 years of artistic styles. Some of them derive from traditional Byzantine representations and are masterworks of Medieval art; others are based on preparatory drawings made by prominent Renaissance artists from Venice and Florence, such as Paolo Veronese, Tintoretto, Titian, Paolo Uccello, and Andrea del Castagno.

Andrea del Castagno was active at San Marco in the mid-15th century, introducing a sense of perspective largely achieved with architectural settings. Attributed to him is the mosaic in the Mascoli Chapel, depicting the Dormition of the Virgin. Tintoretto, in his turn, created the mosaic in the central nave depicting the Presentation of Jesus at the Temple (16th century), while Titian designed and executed, between 1524 and 1530, the mosaic decoration of the Sacristy vault depicting Old-Testament prophets.

Inside, there are also a number of things you can see for a separate fee, such as the Golden Altar, the Museum, the Treasury, and the Crypt. It is also definitely worth paying to go up to the first level just to gaze at the interior and the square outside from an elevated point, or you might as well want to come on a night tour when the basilica is closed to the public and you can have the entire place to yourself.

Entry to the basilica is free but you can pay a small fee just to skip the line and book a time slot.

Why You Should Visit:
Exceptionally beautiful blend of Byzantine and Western art!
The grandiosity of the mosaics and the wealth of the 'treasure room' will make you realize how powerful Venice was in its golden days.

Tip:
The best time to visit the basilica is around midday when all the golden mosaics adorning the vaults, walls and cupolas are illuminated and are most spectacular. The lights are on only for limited times (11:30-12:30), so make sure to schedule your visit accordingly, so as to see/appreciate the mosaic at its best.