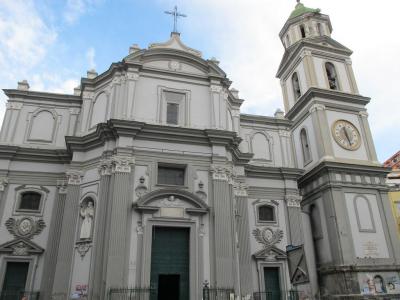 This Basilica dedicated to Saint Mary of health is located in the Sanita neighborhood of Naples. It was built by Dominican Friars as the house of prayer for their abbey.

The Basilica di Santa Maria della Sanità was built on the site of an older church dedicated to Saint Gaudioso. The ancient church had an image of the Holy Virgin dating back to the 5th or 6th century. In 1577, the land was given to the Dominican friars to build a new church over the catacombs of the ancient structure. The Basilica di Santa Maria della Sanità was constructed between 1602 and 1610 and designed by Dominican Friar and mannerist architect, Father Joseph Nuvolo. The gilded tiled cupola was completed in 1613.

The interiors of the Basilica di Santa Maria della Sanità has a Greek cross plan with many columns and small cupolas. It has some important works of religious art including paintings by Agostino Beltrano, Luca Giordano and Andrea Vaccaro. There are also many impressive pieces of marble and stucco sculpture. The entrance to the ancient church and catacombs is near the presbytery of the Basilica. The cloister has a unique oval shape. It was damaged because of the construction of a pylon for the 19th century Bridge in Sanita. The remaining cloister still contains frescoes depicting the history and life of the Dominican order.
Image by Baku on Wikimedia under Creative Commons License.