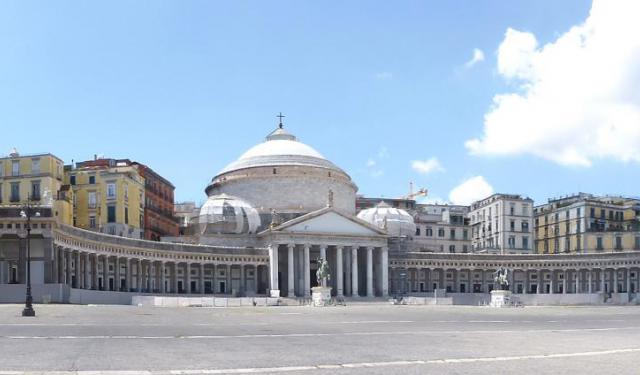 And their concentration is just as great – you can often find several of them in one street. The artistic and spiritual value of these temples is enormous. Early Christian or Gothic, Baroque or Neoclassical, the churches of Naples can mix architectural styles “diversi” and contain precious works of art fit to bring down visitors in a magical and almost pagan awe, whilst giving them a profoundly mystical, Christian experience.

Aside from their beauty, many of these churches are notable for the incredible stories they tell about the city and its roots. Here are some of the most peculiar churches in Naples worth visiting:

Pio Monte della Misericordia – the historic church founded in 1601; famous for its artworks, including Caravaggio's The Seven Works of Mercy.

Gesù Nuovo Church – built as a palace in 1470, converted into a church by the Jesuits in 1584; boasts the highest concentrations of paintings and Baroque sculptures by the most influential artists of the Neapolitan school.

Whether you are a fervent believer or enthusiastic appreciator of art seeking to explore some of the most important churches of Naples for their religious, historical or architectural heritage, take this self-guided walking tour.
Image Courtesy of Wikimedia and Wolfgang Pehlemann.
How it works: Download the app "GPSmyCity: Walks in 1K+ Cities" from iTunes App Store or Google Play to your mobile phone or tablet. The app turns your mobile device into a personal tour guide and its built-in GPS navigation functions guide you from one tour stop to next. The app works offline, so no data plan is needed when traveling abroad.

Naples Cathedral is also known as The Cathedral of the Assumption of Mary. The church is commonly called Cattedrale di San Gennaro in honor of Saint Januarius.

The construction of the cathedral began in the 13th century and was finally completed in the 14th century. The impressive Gothic cathedral was built on the ruins of previous churches' excavations. Over the years, Greek and Roman artifacts have been found underneath the cathedral.

The neo-Gothic facade wasn't completed until 1905. The interior features a gilded coffered ceiling. Artist Luca Giordano completed the baroque sections of the nave and transept.

Priest and architect Francesco Grimaldi designed the Chapel of the Treasury. Several renowned artists worked on the chapel, which was completed in 1646. Jusepe de Ribera created the stunning St Gennaro Escaping the Furnace Unscathed canvas. Giovanni Lanfranco created the magnificent dome fresco. Behind the altar, Saint Januarius's skull and two vials of blood are held in a silver strongbox.

The next chapel contains Saint Januarius's bones in an urn. More of the saint's remains are housed below the altar in the Cappella Carafa chapel.

Visitors will be impressed by the Basilica di Santa Restituta, originally built in the 4th century and renovated in the 17th century. This ancient church holds Europe's oldest baptistry, the Battistero di San Giovanni in Fonte. The baptistry is decorated with 4th-century mosaics.

A vial of blood belonging to revered Saint Januarius is brought out three times a year, and the dried blood usually liquefies. Legend says that when the blood doesn't liquefy, disaster will come to Naples.

This stunning medieval cathedral holds the miraculous blood of Saint Januarius, priceless artworks, and an early Christian basilica dating to the 4th century. It's a beautiful place to view Italian art and architecture and appreciate Naples' religious culture.


Image Courtesy of Wikimedia and Avemundi.
2

The Pio Monte della Misericordia is a small church located on the Via dei Tribunali in the historic center of Naples. It houses a small but significant art gallery that is open for public viewing.

The Pio Monte della Misericordia was founded by a group of seven Neapolitan nobles in 1602. It was called the charity brotherhood and was located in a small church near the stairs that led to the Cathedral of Naples. The brotherhood performed many charitable deeds like feeding the hungry, providing interest free loans for the poor, ransoming Christian slaves, visiting prisoners and burying the indigent dead. The church soon became too small for the charitable activities of the brotherhood and was demolished to make way for a new larger building designed by Antonio Picchiatti. It was constructed between 1658 and 1678. The brotherhood still exists and donates money to schools and hospitals, today.

The Pio Monte della Misericordia has many valuable works of art. The most famous work is Caravaggio's magnificent work called the Seven Acts of Mercy which is regarded as the single most important painting in Naples. It is found above the altar of the church. Besides this masterpiece, impressive works by Carlo Sellitto, Fabrizio Santafede, Luca Giordano and Battistello Caracciolo form part of the gallery.
Image Courtesy of Wikimedia and IlSistemone.
3

The San Pietro Martire Church is attached to a Dominican abbey and is located near the port in the downtown area of Naples. It was founded by the Angevin Dynasty to serve the poor people who lived in the neighborhood.

The San Pietro Martire Church was constructed in 1294 under the orders of Charles of Anjou. Initially it was a small building that could house about 13 monks. Later it was expanded and a belfry designed by F.A. Picchiati was added in 1650. The structure was completed only in the 1750s. When Napoleon’s brother in law, Joachim Murat ruled Naples, the abbey was closed and reopened again once the reign of the Bourbon dynasty was restored. It was finally closed during the unification of Italy in 1864. The church remains an important place of worship in the city.

The San Pietro Martire Church was badly damaged during World War II. In 1953, the grounds were converted into a tobacco processing factory. The building was completely restored in 1979. It now houses the faculty of Literature and Philosophy of the University of Naples. The church has become a university chapel and the old abbey houses university lecture halls.
Image Courtesy of Wikimedia and Baku.
4

The Gesu Nuovo Church is managed by the Society of Jesus today and was initially built as a lavish residence. The unique exterior with diamond shaped stones has symbols believed to be a music score engraved upon them.

The Gesu Nuovo Church was built as the home of Roberto Sanseverino, Prince of Salerno in 1470. It was purchased by the Jesuits for 45,000 ducats in 1580 and turned into a church. Conversion of the building began in 1584 under the directions of renowned Jesuit architect, Giuseppe Valeriano and was completed in 1601. Although dedicated to Jesus and Mary of the Immaculate Conception, it has always been called the Gesu Nuovo Church.

The Gesu Nuovo Church is not only known for its unique exterior but also for its lavish interiors. It has the shape of a Greek cross with 11 chapels. The columns and altars are all covered with marble. Treasures inside the church are the fresco depicting the Expulsion of Heliodorus from the Temple by Francesco Solimena behind the façade and the frescoes depicting the life of the Virgin by Massimo Stanzione. The high altar was designed by F. Giuseppe Grossi was created by Neapolitan artists and covered with rare marbles, bronze and precious stones. Another treasure is the bas relief reproduction of Leonardo da Vinci’s Last Supper by Gennaro Calì.
Image Courtesy of Wikimedia and mweav31.
5

5) Church of the Spirito Santo

The basilica of the Holy Spirit is a small church from 1562. Previously on this spot stood the Duke of Monteleone palace, flanked on both sides by two music conservatories: one of the so-called White brotherhood (Real Compagnia and Arciconfraternita dei Bianchi dello Spirito Santo) and the other of the Green sisterhood. Their names were due to the colors of the clothing worn by the students: the former being the poor of the city, and the latter – the daughters of prostitutes.

The expansion works of 1572-1576 saw the White Convent complex, of which only the homonymous oratory remains today, incorporated into the body of the church, drastically increased.

Complete with its famous dome, the church stands over 70 meters high. The dome was built in 1775 during renovation of the central basin, in order to provide illumination for the nave. Both, the nave and the dome's inside are devoid of any pictorial or otherwise decorative element, whereas the rest of the interior is lavishly decorated with sculptures by Michelangelo Naccherino and Paolo Persico.

The church of San Francesco di Paola is a neoclassical style building flanking the west side of the Piazza del Plebiscito, the largest square in Naples. It lies directly opposite the royal palace.

The church of San Francesco di Paola was commissioned by Joachim Murat, King of Naples as a monument to Napoleon Bonaparte, his brother in law. It was expanded by Ferdinand I and converted into a church when he recovered the throne of Naples after the defeat of Napoleon. The building was designed by Leopoldo Lapera and was completed by the architect, Pietro Bianchi in 1846. The church was dedicated to St. Francis of Paola who lived in an abbey on the site of the square in the 16th century.

The church of San Francesco di Paola has a 58 meter high dome resembling the pantheon of Rome. It is located above the altar and is supported by 34 thick columns that have a height of eleven meters each. The main portico is supported by a semicircular row of white Doric columns. There is another front portico with six Ionic columns supporting the roof. It is a basilica and an active place of worship today and a popular venue for weddings.
Image Courtesy of Wikimedia and pietro scerrato.

Tour Duration: 2 Hour(s)
Travel Distance: 3.6 Km or 2.2 Miles
Where To Stay in Naples, Italy - Guide of Best Areas and Hotels