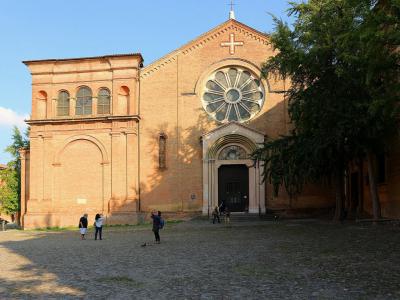 The Basilica of San Domenico is one of Bologna’s major churches. The remains of Saint Dominic, founder of the Order of Preachers (Dominicans), are buried inside the exquisite shrine Arca di San Domenico, created by Nicola Pisano’sm and Arnolfo di Cambio, with later additions by Niccolò dell'Arca and a young Michelangelo.

The square in front of the church is paved with pebbles, as it was in medieval times. The square was where the faithful listened to sermons and also served as the original cemetery. The brick column in the middle of the square has a bronze statue of St. Dominic (1627) and on the back of the square a marble, brick and copper column contains the Madonna of the Rosary, designed by Guido Reni (1632), commemorating the end of the city’s struggle with the plague.
Image Courtesy of Wikimedia and Rosapicci.
Sight description based on Wikipedia.