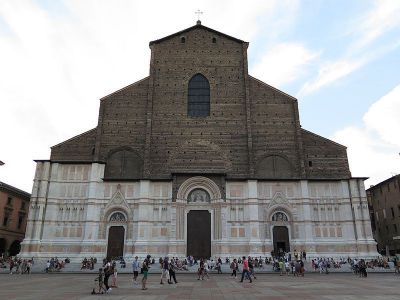 The Basilica of San Petronio is dedicated to the patron saint of Bologna, Saint Petronius. The church has been called the most imposing church in Bologna and is one of the most significant buildings on the Piazza Maggiore. It's the sixth-largest church in Europe.

Work on the Basilica began in 1390 and continued throughout the centuries. In the 1500s, a new architect planned to enlarge the Basilica to compete with St. Peter's Basilica in Rome. However, the work was too complicated and never completed. The Basilica was consecrated in 1954. In 2000, Saint Petronio's relics were moved from the Santo Stefano Church to the Basilica.

The current facade was begun in 1538 but has never been completed. It was designed using cosmological and esoteric "diagramming." The facade is divided into two horizontal bands. The upper band is unfinished and shows exposed brick. The lower band was covered in red and white marble during the 16th century.

The main doorway features a variety of carved scenes. The pillars feature scenes from the Old Testament. The archivolt features carvings of 18 prophets. The architrave has scenes from the New Testament, and the tympanum has a Madonna and Child, Saint Petronius, and Saint Ambrose. Michelangelo called the evocative Madonna and Child the most beautiful of the 15th century.

The side doors were originally built in 1500 and decorated by different artists throughout the years. The campanile was constructed in the 1400s and is an impressive 65-meters tall. The four bells are hand rung using traditional techniques.

The Basilica of San Petronio houses the world's longest indoor meridian line. The line measures 66.8 meters (219.16 feet) and was inlaid in 1656. A sunray enters from a hole in the vault 27 meters high and precisely hits the line, allowing for accurate time measurement.

An impressive 22 side chapels beckon visitors to explore. The chapel of San Petronio contains two important organs. The 1475 organ is one of the oldest organs in existence. This chapel also hosts the Four Crosses, one of the oldest Christian symbols in Bologna. These crosses may have been placed on top of Roman columns by San Petronio to spiritually defend the city.

This impressive church is packed with history and beauty. It can host up to 28,000 people and has hosted many important ceremonies, including the 1530 coronation of Charles V as Holy Roman Emperor.

Entrance is free, but if you wish to take photos, there is a small fee. There is an additional fee to enter Chapel of the Three Kings, which houses a controversial 15th-century fresco. There is a dress code; shoulders and knees must be covered. The Basilica is open every day from 7:45 am to 2:00 pm and 3:00 pm to 6:00 pm.
Image Courtesy of Wikimedia and GennaroBologna.