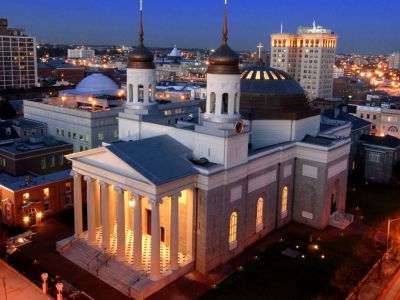 Basilica of the Assumption, Baltimore (must see)

The interior is occupied by a massive dome at the crossing of the Latin cross plan, creating a centralizing effect which contrasts the exterior impression of a linear or oblong building. Surrounding the main dome is a sophisticated system of barrel vaults and shallow, saucer-like secondary domes. The light-filled interior designed by Latrobe was striking in contrast to the dark, cavernous recesses of traditional Gothic cathedrals.
Image Courtesy of Wikimedia and Basilica1.
Sight description based on Wikipedia.