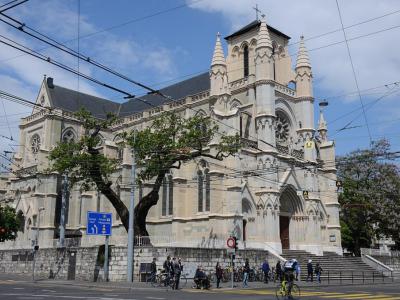 The Basilique de Notre-Dame is the main Catholic church in Geneva. It was built according to the design of Alexandre Grigny, between 1852 and 1857, on the site of former stronghold fortifications. This Neo-Gothic building, whose appearance is partly inspired by the Beauvais Cathedral, could break ground thanks to the city of Geneva ceding land to religious communities to build places of worship, and to the donations and manual labor provided by the Genevan Catholics.

The statue of Our Lady of Geneva, offered by the Pope Pius IX, is venerated; however, it is the basilica's stained glass windows that are particularly remarkable. Some of them are semi-industrial production Neo-Gothic, but most show the evolution of the art of stained glass during the 20th century, in various styles, after those of Claudius Lavergne (installed from 1857 to 1875). From 1912, several artists have successively contributed to adorning the basilica, including Charles Brunner, Alexandre Cingria, Maurice Denis, Gherri Moro, Paul Monnier, Jean-Claude Morend, Théodore Strawinsky.

The building is classified as a cultural property of national importance.