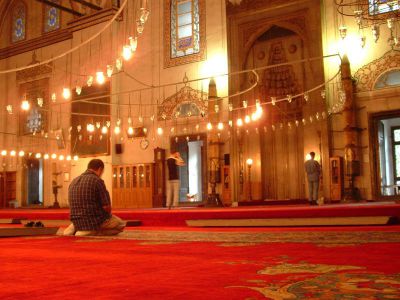 The Bayezid Mosque is an Ottoman imperial mosque located near the ruins of the Forum of Theodosius in Bayezid Square in Istanbul. Commissioned by the Ottoman Sultan Bayezid II, it was one of the largest mosque complexes erected after the conquest of Istanbul.

The complex consists of a madrassah (Islamic school), imaret (public kitchen), shops and a hammam (Turkish bath). The shops and the kitchen were designed by famous imperial architect Mimar Sinan, and the rental proceeds from them were used to support the mosque. Presently, the kitchen premises accommodate the State Library of Istanbul.

The interior of the mosque has been fashioned after the Hagia Sophia, but on a much smaller scale. The architectural style is classic Ottoman and, unlike the Fatih Mosque – repeatedly damaged by earthquakes, the Bayezid Mosque has never undergone any major renovations, except for minor repairs to the dome and minarets done in 1573-74 following an earthquake, and also to the minarets – after a fire – in 1767.

Behind the mosque, there is a garden holding the tombs of Sultan Bayezid II, his daughter Selcuk Hatun, and Grand Vizier Koca Mustafa Resid Pasha.
Image by Zaparojdik on Wikimedia under Creative Commons License.