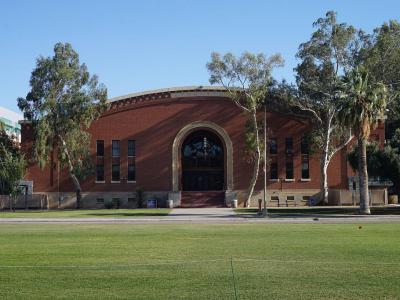 Bear Down Gym (U of A), Tucson

Bear Down Gym, originally known as Men's Gymnasium, is a 300-seat multi-purpose arena on the campus of University of Arizona. It opened in 1926. It was originally home to the University of Arizona Wildcats basketball team. The basketball team moved to the McKale Center when it opened in 1973. Bear Down Gym is located at the center of the university campus and is recognized as one of university's most historical sites. The building was added to the list the National Register of Historic Places in 1990.

The name "Bear Down" came from the famed multi-sport student athlete named John “Button” Salmon. Salmon got into a car devastating car accident in 1926. The last words from Salmon before he died was “… tell the team to bear down”. The saying and story of "Bear Down" has since been a huge part of the athletics at the University of Arizona.

Bear Down Gym gained national attention for its inclusion in the 1984 blockbuster film Revenge of the Nerds. It was the gymnasium of the fictional "Adams College" and also temporary home to the Nerds after they were kicked out of their original Freshmen home (Cochise Hall).

The building has been renovated and updated to accommodate the growing needs of University of Arizona students, including housing resources for students such as the Think Tank, where students are tutored.
Image Courtesy of Wikimedia and Michael Barera.
Sight description based on Wikipedia.

Create Your Own Self-Guided Walk to Visit This Sight
Sight Name: Bear Down Gym (U of A)
Sight Location: Tucson, USA (See walking tours in Tucson)
Sight Type: Attraction/Landmark
Guide(s) Containing This Sight: