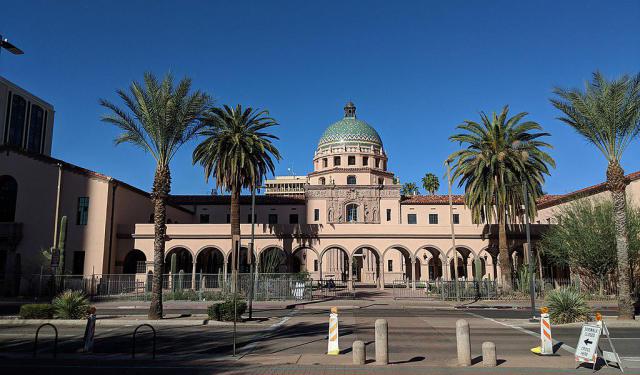 Tucson boasts a variety of structures with a great design and the finest architecture. Walking down the streets you can admire different architectural styles in the buildings, such as Spanish Colonial style, Moorish style and others. Take this self guided walking tour to appreciate Tucson's refined architecture.
Image Courtesy of Wikimedia and Mds08011.
How it works: Download the app "GPSmyCity: Walks in 1K+ Cities" from iTunes App Store or Google Play to your mobile phone or tablet. The app turns your mobile device into a personal tour guide and its built-in GPS navigation functions guide you from one tour stop to next. The app works offline, so no data plan is needed when traveling abroad.

The Saint Augustine Cathedral is one of the oldest and most beautiful buildings in Tucson. Construction on the cathedral began in 1858 and was completed 10 years later. The cathedral has undergone many reconstruction projects since then including one that demolished and rebuilt most of the structure.

Pope Pius XI was pope at the time the building was erected. Therefore, it is his coat of arms that adorns the cathedral. There is also a 12th century crucifix from Pamplona, Spain that hangs in the vestibule.

Today, the church remains the mother church of the Roman Catholic Diocese of Tucson. Visitors are welcome in the church during services or special events. Even for those simply wishing to walk by, the cathedral is worth stopping to enjoy the stained glass windows and the representation of the Mission San Xavier del Bac.

Why You Should Visit
Lovers of architecture will be stunned by the artistry that went into building this cathedral. Even those who are not Catholic will walk away with a sense of awe at the building's beauty.

Tips
Those who want to see the inside of the cathedral should plan a weekend trip, though confessions are open on Wednesdays and Fridays.

Scottish Rite Cathedral is a masonic temple built in 1915. The building is of great historical and architectural importance, and is listed on the USA National Register of historic buildings. The temple features an imposing hall used mainly for special events. The interior of the building features beautiful decoration and contains artwork. It is also known for its historic pipe organ.
Image Courtesy of Wikimedia and Gillfoto.
3

MacArthur Building is a triangular-shaped building in the city of Tucson. It was built in 1907-1908, was originally known as the Heidel Hotel and d was remodeled into the MacArthur Hotel in 1944. The hotel included a restaurant, saloon and barbershop and was built to serve passengers arriving via the Southern Pacific Railroad Depot. The hotel closed in 1979 and was renovated for office use in 1985.

The design of the structure is peculiar, as it can look like a flat building, depending on the angle. The architects of MacArthur Building were Holmes and Holmes. The building has been the city's landmark for over 100 years. It has been listed on the National Register of Historic Places.
Image Courtesy of Flickr and Kerri Stalker.
4

Today, tourists in Tucson can visit the Pima County Courthouse to marvel at the Mission Revival and Spanish Colonial Architecture. The building recently underwent renovations that transformed the building to its original adobe color. Previously, the building was known for the pink paint, which was applied in the early 1950s.

The courthouse isn't just beautiful on the outside. Tourists can enjoy the interior of the building while they visit the offices of Southern Arizona Heritage and Visitor Center, which are open daily.

The Pima County Courthouse is on the National Register of Historic Places. One of the most famous outlaws to be tried in this building was gangster John Dillinger. Dillinger and his gang were caught in Tucson in 1934. For four days, visitors were able to pay a fee to walk by the cell to catch a glimpse of the infamous gangster.

Dillinger wasn't the only famous face to grace the halls of the Pima County Courthouse. Actor Clark Gable was tried at the courthouse and found guilty of negligence in a car accident. Some 40 years later, actor Johnny Depp also faced a traffic violation in the courthouse.

The building has also been used for films, including the 1976 version of "A Star is Born" and the 1980 comedy "Stir Crazy."
Image Courtesy of Wikimedia and Motorrad-67.
5

Between the Old County Courthouse and City Hall lies El Presidio Park. What looks like a simple park actually has a very long and storied history.

The land was first used as a park in 1776. It also served as a military garrison for the Spanish and American settlers. In 1862, the area was designated as a free zone. It wasn't until the 1970s that it became a park once more.

Today, El Presidio Park is nearly three acres of green space, a rose garden, veterans memorials and art installations. It is not uncommon to see festivals taking place in the park, including the Tucson Folk Festival and the Tucson Meet Yourself Festival. It is also a popular spot for political rallies, celebrations and weddings.

Tourists should stop at each of the memorial statues to develop an understanding of the changes that took place over the years. They can also see an original marker of the walls of the old Presidio.
Image Courtesy of Wikimedia and Daquella manera.
6

The Corbett House is a popular stop for lovers of arts and architecture. This Mission Revival style home belonged to the J. Knox Corbett family from the last 19th century through the 1960s.

The Corbett family was a prominent family of Tucson, thus the house was one that was frequently a hub for parties and society events. It was also furnished with fine European arts and furniture. It houses one of the area's first air conditioning units. It was also rumored to hold a gin still during prohibition.

J. Knox Corbett was a mayor of Tucson and his wife, Lizzie Hughes Corbett, was the daughter of Tucson City Council member Samuel C. Hughes.

Visitors can take guided tours of the home on Sundays. It is not open to the general public.
Image Courtesy of Flickr and John Roger Palmour.
7

The Levi H. Manning House was built during the turn of the 20th century. The home was created in an area called Snob Hollow and was originally a 12,000 square foot mansion. Since that time, it has been expanded into a 30,000 square foot space that functioned as an events center. Today it is a popular spot for visitors on walking tours of the city.

Levi H. Manning was mayor of Tucson. He built his fortune in mining, but was also active in the early days of electricity. He is credited with using an electric trolley system in the town to replace the horse and buggy.

The home is not currently in use or open to the public, but it has been used as a headquarters for the Elks Lodge and as a special events venue. Those on walking tours will marvel at the unique combination of Spanish Colonial, Italian Renaissance and Santa Fe Territorial architecture. Visitors can also spot frescoes featuring motifs of exotic birds and flowers that were painted by the artist Salvador Corona.

Some tourists may go on a ghost hunt at the Levi H. Manning House. Its reputation as a haunted house has endured for decades. Visitors have claimed to see apparitions floating by holding candlesticks before disappearing once again.
Image Courtesy of Wikimedia and Ammodramus.