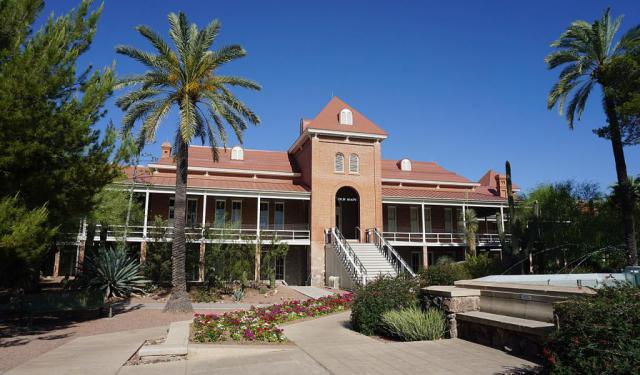 Founded in 1885, the University of Arizona was the first university in the state, providing learning to over 45,000 students in 19 separate colleges and schools. The university is one of 65 elected members of the prestigious Association of American Universities and the only representative from the state of Arizona to this group. Take this self-guided walking tour to visit the main sights on the university campus.
Image Courtesy of Wikimedia and Michael Barera.
How it works: Download the app "GPSmyCity: Walks in 1K+ Cities" from iTunes App Store or Google Play to your mobile phone or tablet. The app turns your mobile device into a personal tour guide and its built-in GPS navigation functions guide you from one tour stop to next. The app works offline, so no data plan is needed when traveling abroad.

Designed by Phoenix architect James Miller Creighton, construction of Old Main began on October 27, 1887. The budget of $37,969 ran out before the roof was finished. When university officials discovered federal loans were available for agricultural schools, they renamed the building from the originally planned School of Mines to the School of Agriculture. Federal funding allowed completion of the building and it opened for the first class of the university on October 1, 1891. Old Main, then the only building on the campus, contained the classrooms, library, offices, and dorms. Six faculty taught 32 students in 1891.

In 1919, the Alexander Berger Memorial Fountain was constructed in front of Old Main. Berger funded the project as a memorial for 13 University of Arizona students who were killed in World War I, including his nephew. Completed for $5500, the fountain was dedicated on January 31, 1920 by General John J. "Blackjack" Pershing.

Due to neglect by the University, Old Main fell into disrepair and was condemned by the City of Tucson in 1938. Demolition was averted when the US Navy repaired the building in 1942, for use as a Naval Indoctrination Training School during World War II. The Navy then paid $20,000 in 1945 to turn it back into a functioning campus building.

The first floor of Old Main was restored and renovated in 2008 at a cost of $4.6 million. It then housed the University's Office of Admissions, Center for Exploratory Students, and the Dean of Student's Office. In January 2013, renovation of the entire building began — including a modernization of the interior spaces, replacing the roof, and framing the porch. It reopened before the 2014-15 academic year. In addition to extensive improvements, the Office of the President was relocated to Old Main.


Image Courtesy of Wikimedia and Michael Barera.
Sight description based on Wikipedia.
2

2) Student Union Memorial Center (U of A)

The Student Union Memorial Center, on the north side of the Mall east of Old Main, was completely reconstructed between 2000 and 2003. It replaced the old structure originally opened in 1951. The student union has 405,000 square feet (37,600 m2) of space on four levels, and includes 14 restaurants, a grocery market, a two-level bookstore with an office supplies section, 23 meeting rooms, eight lounge areas (including one dedicated to the USS Arizona), a computer lab, a U.S. Post Office, and a copy center.

The building was designed to mirror the USS Arizona (BB-39). A variety of sculptures pepper the premises, decorating the air with the chimes of dog tags or the colors of refracted light in honor of those who have served. A bell housed on the USS Arizona, one of the two bells rescued from the ship after the attack on Pearl Harbor, has a permanent home in the clock tower of the Student Union Memorial Center. The bell arrived on campus in July 1946. The bell is rung seven times on the third Wednesday of every month at 12:07 pm – symbolic of the battleship's sinking on December 7, 1941 – to honor individuals at the UA, as well as after home football victories, over any team except other Arizona schools.
Image Courtesy of Msr69er.
Sight description based on Wikipedia.
3

Bear Down Gym, originally known as Men's Gymnasium, is a 300-seat multi-purpose arena on the campus of University of Arizona. It opened in 1926. It was originally home to the University of Arizona Wildcats basketball team. The basketball team moved to the McKale Center when it opened in 1973. Bear Down Gym is located at the center of the university campus and is recognized as one of university's most historical sites. The building was added to the list the National Register of Historic Places in 1990.

The name "Bear Down" came from the famed multi-sport student athlete named John “Button” Salmon. Salmon got into a car devastating car accident in 1926. The last words from Salmon before he died was “… tell the team to bear down”. The saying and story of "Bear Down" has since been a huge part of the athletics at the University of Arizona.

Bear Down Gym gained national attention for its inclusion in the 1984 blockbuster film Revenge of the Nerds. It was the gymnasium of the fictional "Adams College" and also temporary home to the Nerds after they were kicked out of their original Freshmen home (Cochise Hall).

The building has been renovated and updated to accommodate the growing needs of University of Arizona students, including housing resources for students such as the Think Tank, where students are tutored.
Image Courtesy of Wikimedia and Michael Barera.
Sight description based on Wikipedia.
4

The Main Library, opened in 1976, serves as the library system's reference, periodical, and administrative center. As of 2012, the UA's library system contains over six million print volumes, 1.1 million electronic books, and 74,000 electronic journals. Most of the UA Library's collections are housed here. The Main Library is on the southeast quadrant of campus near McKale Center and Arizona Stadium.
Image Courtesy of Msr69er.
Sight description based on Wikipedia.
5

McKale Memorial Center is the home of the university's Wildcats basketball team. It is primarily used for basketball, but also has physical training and therapy facilities. The arena opened in February 1973 and has an official capacity of 14,644 spectators.

The McKale Center was named in honor of J.F. "Pop" McKale, a major athletic figure at U of A from 1914 to 1957. At one time, he was head coach of all of the school's athletic teams. He was head basketball coach from 1914 to 1921, where he achieved a 49–12 (.803) record. He led the football team from 1914 to 1930, with an 80–32–6 (.703) record. It was McKale's first team that resulted in Arizona's teams being nicknamed "Wildcats." In 1914, Arizona's name meant very little in the college football world. Although they lost to Occidental College in Los Angeles 14–0, a reporter for the Los Angeles Times was so impressed with Arizona's effort that he wrote, "The Arizona men showed the fight of wild cats". Soon afterward, Arizona's student-athletes were nicknamed the Wildcats.

In terms of capacity, McKale Center is the second-largest arena in the Pac-12 conference; Utah's Huntsman Center in Salt Lake City is first, but Arizona averages greater attendance.
Image Courtesy of Wikimedia and Michael Barera.
6

6) Student Recreation Center (U of A)

In addition the facility provides a computer lab and a study center for tutoring, a bookstore shop, and a food service featuring healthy options.
Image Courtesy of Flickr and Presidio of Monterey.
7

Arizona Stadium is an outdoor college football stadium on the campus of the University of Arizona. It is the home field of the Arizona Wildcats of the Pac-12 Conference.

Originally constructed in 1929 to hold 7,000 spectators, the stadium's seating capacity has been expanded numerous times since. Today the stadium has a total capacity of over 50,000. The facility also includes the offices of the Wildcat football program, as well as some non-athletic academic offices, including the Steward Observatory Mirror Lab.

The football field runs in the traditional north–south configuration and the new artificial Field Turf sits at an elevation of 2,430 feet (740 m) above sea level. The ZonaZoo student section takes up 9,000 seats on lower east sideline, making it one of the larger student sections in the Pac-12. The west side bleachers are generally reserved for season ticket holders and the visiting team gets a section in the southwest corner.
Image Courtesy of Wikimedia and Wcarlisle4.
Sight description based on Wikipedia.