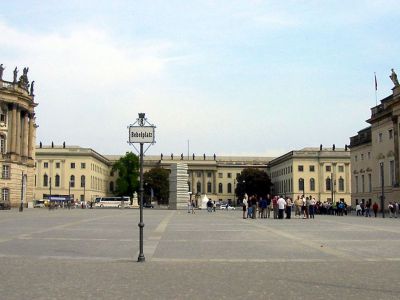 Bebelplatz is a public square on the southern side of the Unter den Linden Boulevard, and is named after August Bebel, founder of the Social Democratic Party of Germany in the 19th century. Initially, when laid out in 1741-1743, it was called Platz am Opernhaus. Today, this beautiful simple square is surrounded by impressive buildings: the Humboldt University and library, St. Hedwig's Cathedral, and the State Opera house.

Bebelplatz is infamously known as the site of the largest attempt to erase history and knowledge in the 20th century. In the evening of May 10, 1933 members of the SA, SS, Nazi students and Hitler Youth gathered here on the instigation of Propaganda Minister Joseph Goebbels to burn books from the university library that they deemed unsuitable. Whipped up into a frenzy, the Nazis burned nearly 20,000 books that night, including works by Thomas Mann, Erich Maria Remarque, Heinrich Heine, Karl Marx and many other authors.

Remarkably, in 1823, Heinrich Heine prophetically wrote: "Where books are burned, in the end, people will also be burned." A little more than a century later, his quote eerily predicted the mass murder of the Jews in the Holocaust that soon followed.

Today, the site of the Nazi book-burning in the center of the square is marked with a memorial: a hardly-visible small glass square window set in the cobbles through which one can see a below-ground room lined with empty bookcases. The implementation is interesting and affects perception. A beautiful memorial to the start of the things so terrible!

Why You Should Visit:
Must-see if you are interested in German History!
Beautiful historical buildings in the square, such as the Opera House, St. Hedwig's Cathedral, and Humboldt University.

Tip:
Good to visit at night (or late in the afternoon), since the shining light will help you see the memorial on the ground.
Don't forget to check out the Gendarmenmarkt behind, which is equally, if not even more, impressive!
Image by Adam Carr on Wikimedia under Creative Commons License.
Sight description based on wikipedia