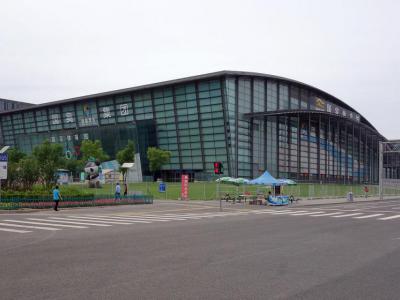 Beijing National Indoor Stadium is located to the south of Olympic Center at Olympic Green. This stadium is renowned for its state-of-the-art sports facilities. After it was built and used for the Olympic Games in 2008, the stadium is used for various sports competitions, as a multi-functional exercise center and as a host to cultural and other entertainment programs.

This large and impressive stadium covers a surface area of 809,000 square meters and can hold 19,000 spectators at a time. The modern and sleek, strikingly curved roof of the stadium is eye-catching and is considered to be an architectural marvel.

Beijing National Indoor Stadium was host to events such as handball and gymnastics at the 2008 Olympics. Walk around the stadium and you will find the well equipped warm-up gym. The stadium is constructed in an environmentally friendly manner; it uses solar energy for power wherever possible to encourage reduced pollution and energy conservation.

The stadium is optimally insulated using glass curtain walls and produces an amazing 100 kilowatts of electricity every day. If you are a sports fan, you simply cannot skip this stadium on your trip to Beijing.
Image by 颐园新居 on Wikimedia under Creative Commons License.