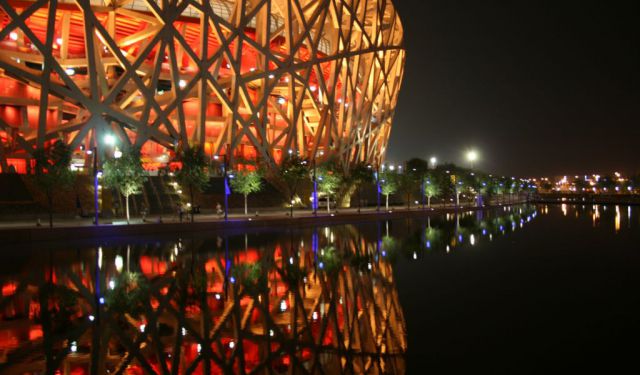 Image by Alex Needham on Wikimedia under Creative Commons License.

The Olympic Park in Beijing was built for the Olympic and Paralympic Games of 2008. This modern complex represents a contemporary architectural approach as compared to the more traditional buildings that dominate the city. Among its signature items are the iconic Bird's Nest, otherwise known as the main Olympic stadium, and the beautiful Water Cube – the Aquatics Center for water sports.

After dark, the park is brightly illuminated with a multicolored rainbow that makes it a perfect place for an evening walk. If you would like to discover modern China manifested in the Olympic Park of Beijing, follow this self-guided walking tour!
How it works: Download the app "GPSmyCity: Walks in 1K+ Cities" from iTunes App Store or Google Play to your mobile phone or tablet. The app turns your mobile device into a personal tour guide and its built-in GPS navigation functions guide you from one tour stop to next. The app works offline, so no data plan is needed when traveling abroad.

Olympic Sports Center Gymnasium is a part of the stadium where the Modern Pentathlon and equestrian events during the 2008 Beijing Olympic Games were held. This stadium is huge with a total area of 34,975 sq meters and a seating capacity of 40,000. This stadium was renovated for the Olympics.

The Olympic Sports Center Stadium looks grand today after its 17 month renovation using some of the top design and construction firms in Beijing, prior to the 2008 Olympics. Here you will find bronze statues of running athletes. The gym is designed to cater to professional athletes and sportsmen.

This stadium came into existence in 1990 and has served as a venue for the 11th Beijing Asian Games. It features advanced facilities at par with the best stadiums around the world. After the recent renovation, the stadium looks grand and vibrant attracting a lot of tourists.

The Gymnasium at the stadium has heat preserving interiors including the doors and windows. It is covered with a material that preserves heat. Enter the hall and you will be struck by its elegance furnished with attractive light purple chairs.

Image by Doma-w on Wikimedia under Creative Commons License.
2

The Olympic Green is an Olympic Park constructed for the 2008 Summer Olympics. Since then, the streets around the park have been used for an exhibition street race of the FIA GT1 World Championship in 2011, after a race at Goldenport Park Circuit in the vicinity. It will again serve as an Olympic Park when Beijing hosts the 2022 Winter Olympics.

Beijing National Stadium is very popular for its unique architecture. Referred to as the “Bird’s Nest”, this stadium constructed in an elliptical shape and with a seating capacity of 91,000 was one of the top venues for the 2008 Beijing Olympics.

This stadium is built with 36 kilometers of steel beams resembling twigs in a bird’s nest. To let in light, spaces between the beams are covered with clear plastic sheets. To the left of the building, you will find the shadow of the building that clearly depicts these spaces. Olympic Green landscaping resembles angles of a Bird’s Nest.

Bird’s Nest is meant to be a cornerstone of the city landscape from its inception. It is located on the city's main north-south axis, which also includes the Forbidden City, Tiananmen Square and the Temple of Heaven.

Today Bird’s Nest remains a popular tourist attraction in more than a decade after the Beijing Olympics.

Tip:
You can purchase tickets to enter the building itself and you will be free to wander around as much as you like. The highlight is the walk on the roof – not something you usually get to do at stadiums. The view from the roof is spectacular on a good day and all the Olympic Park facilities can be easily seen.

Inside the Beijing Olympics Park , you will find the Goddess Beiding Temple. This temple was constructed during the Ming Dynasty and is a well preserved relic.

In order to keep the environment of this temple preserved, the Water Cube was shifted away at least by 100 meters from the originally planned site. This architectural marvel is one of Beijing’s popular “Five Peaks and Eight Temples”. Perfectly complementing Beijing city’s architecture and planning, this temple is ideally located within the Olympic Green on the north extension of the city’s central axis.

Goddess Beiding Temple was originally constructed during Ming Dynasty’s Xuande period. Qing Dynasty’s Qianlong period saw the temple being renovated and today proudly stands as one of the most profound images in the city.

View from afar shows this temple and its surrounding modern architectural marvels such as the Water Cube and Bird’s Nest as an interesting spectacle. Thousands of tourists from around the world visit this temple every day to enjoy its grandeur and ambience.
Image by kzev on Flickr under Creative Commons License.
4

The Beijing Olympic Park City Sculpture is a amazing collection of 65 unique masterpieces created by acclaimed sculptors from 64 countries. Located in the Olympic Park, the sculptures intrigue visitors with their incredible forms and materials. They provide perfect photo ops for Instagrammers.
Image by kitmasterbloke on Flickr under Creative Commons License.
5

Water Cube or the Beijing National Aquatics Center is definitely the pride of the city. This structure is designed, expertly combining Chinese traditional values and modern, contemporary technologies. The central theme of the Water Cube is the traditional Chinese concept of the shape of Earth being square and the shape of Heaven being round.

Designed by talented architects from China and Australia, the National Aquatics Center is one of the first buildings in the world to be built using the revolutionary “soap bubble” theory. It is made of polyhedral steel-framed structure.

The Water Cube is insulated using ETFE or the ethylene-tetrafluoroethylene copolymer. As you look at this building you will be struck by different sized bubble like pneumatic cushions. There are a total of 3,065 cushions in this first ever large scale project which holds the world record for massive deployment.

The name Water Cube originates from the fact that this building looks like a large blue box. The blue color was especially chosen to reflect sunlight. A visit to the Water Cube is a must for any visit to the Olympics Park. Enjoy the stunning view of the building that reflects and shines like a pearl in water in sunlight.
Image by Charlie fong on Wikimedia under Creative Commons License.
6

Beijing National Indoor Stadium is located to the south of Olympic Center at Olympic Green. This stadium is renowned for its state-of-the-art sports facilities. After it was built and used for the Olympic Games in 2008, the stadium is used for various sports competitions, as a multi-functional exercise center and as a host to cultural and other entertainment programs.

This large and impressive stadium covers a surface area of 809,000 square meters and can hold 19,000 spectators at a time. The modern and sleek, strikingly curved roof of the stadium is eye-catching and is considered to be an architectural marvel.

Beijing National Indoor Stadium was host to events such as handball and gymnastics at the 2008 Olympics. Walk around the stadium and you will find the well equipped warm-up gym. The stadium is constructed in an environmentally friendly manner; it uses solar energy for power wherever possible to encourage reduced pollution and energy conservation.

The stadium is optimally insulated using glass curtain walls and produces an amazing 100 kilowatts of electricity every day. If you are a sports fan, you simply cannot skip this stadium on your trip to Beijing.
Image by 颐园新居 on Wikimedia under Creative Commons License.
7

Spread over a massive 1,135 hectares, the Olympic Green is divided into a central area and a forest park. One of the prominent buildings at this venue is the Olympic Green Convention Center. Along with 13 other centers here, the convention center played a major role during the 2008 Beijing Olympic Games.

The three concepts of technology-empowered, culture-enriched and environmental friendly Olympics is reflected in the Olympic Green’s construction, design, location and post game usage. This venue was open to public after the Olympic Games and is being developed as an active center for sports competitions, entertainment programs, cultural programs, displays, conferences and shopping.

Olympic Green Convention Center was host to events such as shooting, fencing and modern pentathlon fencing disciplines during the Olympics. Covering an area of 270,000 square meters, this center is used as the Main Press Center and International Broadcast Center during exhibitions and conventions.

Tourists from all over the world flock to Olympic Green and tour the impressive buildings here. On your trip to Beijing, pay a visit to this venue that saw feverish, frenzied activity during the prestigious 2008 Olympic event. While there, do not miss out the well equipped, state-of-art Olympic Green Convention Center also known as the National Convention Center.
Image by Doma-w on Wikimedia under Creative Commons License.