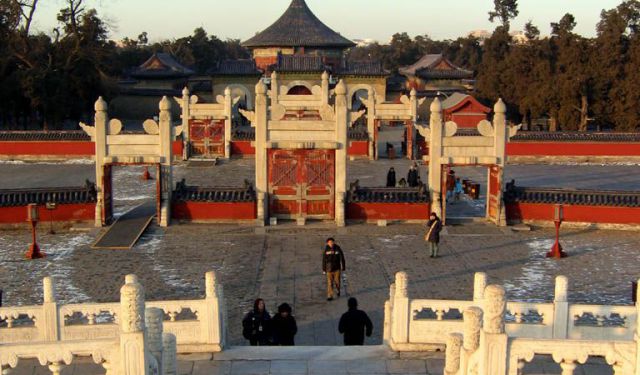 Image by ehnmark on Flickr under Creative Commons License.

Chinese temples are of unique beauty and have withstood many dynasties, beginning with the Qin Dynasty. Because the temples have always been connected to the imperial families, many of them were destroyed by 1949 when the last dynasty ended. Nevertheless, a great number of beautiful temples with great history still stand in Beijing. Take the following tour to discover the most famous temples in the city:
How it works: Download the app "GPSmyCity: Walks in 1K+ Cities" from iTunes App Store or Google Play to your mobile phone or tablet. The app turns your mobile device into a personal tour guide and its built-in GPS navigation functions guide you from one tour stop to next. The app works offline, so no data plan is needed when traveling abroad.

1) Temple of Confucius (must see)

The Temple of Confucius was constructed in 1302 and later expanded to occupy 20,000 square meters. Today holds the distinction of being the second largest in China. It is located close to the Imperial Academy on Guozijian Street. Between 1981 and 2005, this temple housed part of the Capital Museum’s art collection.

As you enter the temple’s complex, you will find four courtyards that are aligned along the central axis. Some of the prominent structures that extend from south to north of the temple include the Dacheng Gate, Xianshi Gate, Chongshengci and the Dacheng Hall.

On each side of the front courtyard, you will find positioned 198 stone tablets with an inscription of names of Jinshi or advanced scholars from the Qing, Ming and Yuan dynasties. Ancient Chinese historical documents can be found at the Qing and Ming dynasty’s 14 stele pavilions made of stone.

Don't miss out on the drums made of carved stone. These drums were made during the Qianlong period between 1736 and 1795. In the Hall of Great Perfection, you will find an ancient Chinese musical instruments collection. Confucius’ shrine is also in this hall.

The temple ground features a variety of attractive carvings. Pay a visit to this beautiful and interesting temple on your trip to Beijing.

Why You Should Visit:
Great place to relax and enjoy the tranquility of the temple & complex. Plenty of places to sit out of the heat or to explore the intricacies of the temple decorations within.

Tip:
The temple's gift shop has gorgeous paper cuttings and prints that you're less likely to find elsewhere.
You can combine this visit with the Yonghe Temple, as they are less than 100m from each other. Also in front, you have the beautiful Dadu Museum of Art.

Located in the north east part of Beijing city, Yonghe Temple is popularly known as the Lama Temple. This monastery and temple attached to Tibetan Buddhism’s Geluk School is one of the most important and largest Tibetan Buddhist monasteries and is constructed in Tibetan and Han Chinese style.

Construction of this temple started during the Qing Dynasty in 1694 and originally the building was used as the residence of court eunuchs. Later on, it was converted to Prince Yong’s court. He was the son of Kangxi Emperor and the future Yongzheng Emperor. When he ascended the throne in 1722, Yongzheng converted half of the building into a monastery for Tibetan Buddhism monks retaining the other half as the imperial palace. This temple houses his coffin since 1735 when he died.

Qianlong Emperor, his successor, elevated the temple to the imperial status by symbolically changing the turquoise tiles to yellow tiles, usually reserved for emperors. Monks from Tibet and Mongolia started using this monastery as their residence and ever since this Lamasery has grown to be the national center of Lama Administration.

Yonghe Temple has successfully survived the Cultural Revolution of the 1960s-70s, largely due to the protection of Zhou Enlai, then Prime Minister of China. In 1981, the temple was reopened to the public. Today it attracts a lot of tourists from all parts of the world.

Why You Should Visit:
While the temple is quite beautiful in itself, the ability to see the largest Buddha carved from a single piece of wood is a big highlight here.
As a plus, there's none of the shouting and camera shoving activities you tend to see elsewhere, as tourists tend to be more respectful.

Tip:
Upon entering, you can receive free incense to burn on site (don't use it all at once) or take home as a nice memento.
Across the street from the subway exit, there's a tea shop that also sells ice cream, very popular with locals!

Just outside the second ring road in Beijing, around the Andingmen area, you can find the Temple of Earth. This temple is spread over 42.7 acres and is close to the famous Yonghe Temple.

Temple of Earth was built by Emperor Jia Jing of the Ming Dynasty in 1530. Here, annual ritual of offering to the heaven was held during summer solstice and was attended by Qing and Ming dynasty emperors.

As you enter the temple premises, you will find charming tree lined paths and lush gardens. It was restored and renovated over a period of time after being damaged during the Cultural Revolution. The temple is square in shape because it symbolizes the Earth. It is located to the north of Beijing because north is the direction of Earth.

Circular shaped Temple of Heaven is located to the South of Beijing. This temple symbolizes sky and heaven. To the East and West lie the temples of Sun and Moon respectively. These four temples are believed to interact in a spiritual manner. Temple of Earth has been listed by the Chinese government among the most important monuments to be preserved. Do not miss a visit to this wonderful temple on your trip to Beijing.
Image by Paul Louis on Wikimedia under Creative Commons License.