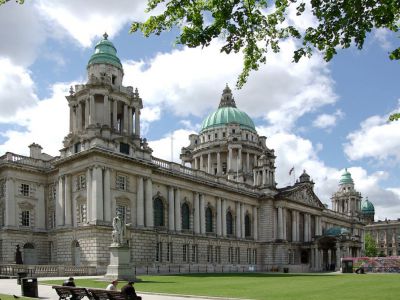 Belfast City Hall is the civic building of the Belfast City Council. Located in Donegall Square, it faces north and effectively divides the commercial and business areas of the city centre.

The site now occupied by Belfast City Hall was once the home of the White Linen Hall, an important international Linen Exchange. The Street that runs from the back door of Belfast City Hall through the middle of Linen Quarter is Linen Hall Street. Plans for the City Hall began in 1888 when Belfast was awarded city status by Queen Victoria. This was in recognition of Belfast's rapid expansion and thriving linen, rope-making, shipbuildingand engineering industries. During this period Belfast briefly overtook Dublin as the most populous city on the island of Ireland. Construction began in 1898 under the supervision of architect Sir Alfred Brumwell Thomas and was completed in 1906.

The exterior is built mainly from Portland stone and is in the Baroque Revival style. It covers an area of one and a half acres and has an enclosed courtyard. Featuring towers at each of the four corners, with a lantern-crowned 173 ft (53 m) copper dome in the centre, the City Hall dominates the city centre skyline. As with other Victorian buildings in the city centre, the City Hall's copper-coated domes are a distinctive green. The pediment sculpture is by F. W. Pomeroy, assisted by local carver J. Edgar Winter, and features on the reverse side of the current series of £10, £20, £50 and £100 sterling banknotesissued by the Northern Bank.

The interior has a number of notable features, including The Porte-Cochère and Grand Entrance, The Grand Staircase, The Reception Room and The Great Hall. The latter was destroyed during the Belfast Blitz during WW2 and subsequently rebuilt. Various memorials are located in the building, including ones to Frederick Robert Chichester, Earl of Belfast, Sir Crawford and Lady McCullagh and the 36th (Ulster) Division.

The gardens surrounding the City Hall are a popular with office workers taking their lunch in the summer months, as well as tourists and teenagers gathering in their dozens to enjoy the green. Various statues stand on the grounds, including one of Queen Victoria by Sir Thomas Brock. There is also a granite column dedicated to the American Expeditionary Force. The grounds also house Northern Ireland's main war memorial, The Garden of Remembrance and Cenotaph, at which wreaths are laid on Remembrance Day.
Image Courtesy of Wikimedia and Macnolete.
Sight description based on Wikipedia.