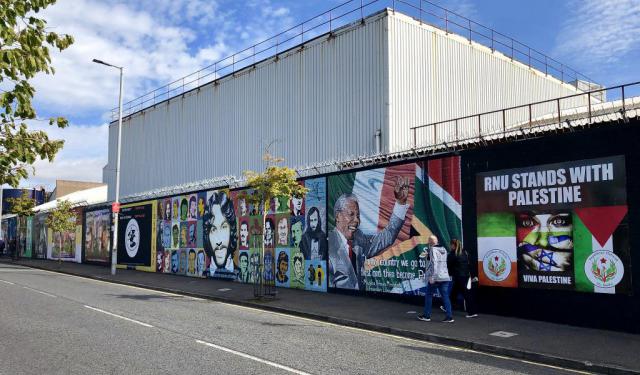 The Troubles and Peace Process Landmarks (Self Guided), Belfast

Decades past the official end of The Troubles in Belfast, the price of peace in Northern Ireland remains high. One of the means with which to secure it, back in 1969, was erecting a wall to physically separate the capital's warring Protestant and Catholic communities. Known since as the Peace Wall, the structure has become a popular tourist attraction for the multiple murals painted thereon ever since – some talking of harmony, whilst others carrying messages of revenge or oppression.

Walking down the Catholic Falls Road and Protestant Shankill Road in Belfast, you can find many other signs of division, too. Being reminders of the past, they also serve as symbols of the present, quite somber yet still worth learning about, including:

Bobby Sands Mural – a world-famous painting of the Irish Republican Army leader and elected member of the UK parliament, who died in prison from a hunger strike.

Irish Republican History Museum – holding a collection of artifacts and relics related to the period in the Northern Irish history, known as The Troubles.

Garden of Remembrance – a memorial garden dedicated to the IRA members killed during The Troubles, as well as civilians and deceased ex-prisoners.

Shankill Road Memorial Gardens – a memorial to the victims of bomb explosion on Shankill Road, carried out by the IRA in October 1993 in an attempt to assassinate the Ulster Defence Association leadership.

To explore these and other sights of Belfast that tell the story of The Troubles and peace process via artwork and other media, take this self-guided walk and expand your horizons.
Image Courtesy of Flickr and Megan Coughlin.
How it works: Download the app "GPSmyCity: Walks in 1K+ Cities" from iTunes App Store or Google Play to your mobile phone or tablet. The app turns your mobile device into a personal tour guide and its built-in GPS navigation functions guide you from one tour stop to next. The app works offline, so no data plan is needed when traveling abroad.

The Bobby Sands Mural is a world-famous portrait of the IRA leader. It is painted on the walls of the Sinn Fein Political Party Press Office at the corner of Sevastopol Street and Falls Road. It is based on a photograph taken of Sands while he was imprisoned.

In 1977, Bobby Sands was imprisoned in Long Kesh Maze Prison for 14 years for gun possession along with a number of other IRA members and leaders. While in prison, Sands and his cohorts demanded that they not be forced to wear prison uniforms or do prison work. They also wanted to be able to associate with other prisoners and receive visitors and/or packages. Denied these demands, Sands and the others went on a hunger strike.

Sands was elected to the UK parliament during his time in prison. However, he died from the hunger strike before he was able to take his seat. This mural of his smiling face was created as a memorial in 1998. It is one of many murals in Belfast, but is arguably the most well known.

The Eileen Hickey Irish Republican History Museum is located in Conway Mill in West Belfast. The museum first opened in 2007 but it located in a former linen mill that dates to 1842. It opened on the anniversary of the death of the main benefactor of the museum, Eileen Hickey.

Hickey was the former Officer Commanding of the Provisional Irish Republican Army (IRA) prisoners in Armagh Women's prison and she dedicated her life to preserving artifacts and relics from the period in Irish history known as The Troubles.

Some exhibits at the Irish Republican History Museum include a jacket worn by Mairead Farrell, a cell door from the Armagh women's prison, weapons used during The Troubles, items sculpted by prisoners and a large number of posters, paintings and articles. The museum is also home to a library and interpretive center.

The Irish Republican History Museum is open Tuesday through Saturday from 10 AM to 2 PM.

The Garden of Remembrance is a memorial garden in Belfast, dedicated to the Irish Republican Army "D" Company members killed during The Troubles, as well as civilians and deceased ex-prisoners from the "D" Company area which is the Fall Road area, which has historically been a predominantly Irish Republican area during the conflict.

The garden features an iron gate, with a patio leading towards a large plaque. There are gardens on either side of the walkway. An Irish Tricolor flies over the plaque.

The Garden bears a message in both Irish and English:

"This monument was erected by the Falls Cultural Society on behalf of the Residents of the Falls Road dedicated to those brave and gallant vols of D' Company 2nd Batt Irish Republican Army who made the supreme sacrifice in their quest for Irish Freedom."
Image Courtesy of Wikimedia and Ross.
Sight description based on Wikipedia.
4

The Belfast Peace Walls are barriers that separate Protestant and Catholic neighborhoods through the city. They were originally built in 1969 to establish peace by separating sectarian groups. Today, they are popular tourist attractions.

Arguably, the most famous Peace Wall is located between Shankill Road and Falls Road. There is also a large Peace Wall along Cupar Way, which has become a canvas for local artists. Graffiti and street art intermingle on the Peace Walls to provide color to the city while also reminding citizens and tourists of the strife of the country.

The walls were originally meant to be temporary structures. Ironically, the structures have not only stayed in place, but have increased in number. The most recent Peace Wall was constructed in 2017. There are now 59 in the city.

The Belfast City Council began a plan to remove the Peace Walls, but the vast majority of residents believe they continue to help quell violence. Still, the plan is for all Peace Walls to be removed in the future.
Image Courtesy of Flickr and Megan Coughlin.
5

The Shankill Road Memorial Garden was constructed as a memorial to victims of a bomb explosion on Shankill Road. The bombing was carried out by the IRA in October 1993 as an attempt to assassinate the UDA leadership. The bombing killed one IRA member, a UDA member and eight citizens. It also wounded over 50 people.

The garden was opened on May 29, 1994. In addition to serving as a memorial to the Shankill Road bombing victims, the garden honors casualties from both World Wars along with other conflicts.

Visitors to the Shankill Road Memorial Garden will find a memorial stone and lamppost. Each contain ashes from the flowers placed at the bombing. The gated garden has floral plots, shade trees and numerous benches.

Shankill Road Memorial Garden is located on Shankill Road next to the West Kirk Presbyterian Church. It is open to visitors 24 hours, seven days per week.
Image Courtesy of Flickr and Stuart Caie.
6

The Shankill Road (from Irish: Seanchill, meaning 'old church') is one of the main roads leading through west Belfast. It runs through the working-class, predominantly loyalist, area known as the Shankill.

The road stretches westwards for about 1.5 mi (2.4 km) from central Belfast and is lined, to an extent, by shops. The residents live in the many streets which branch off the main road. The area along the Shankill Road forms part of the Court district electoral area.

In Ulster-Scots it is known as either Auld Kirk Gate ("Old Church Way"),[better source needed] or as Auld Kirk Raa ("Old Church Road"). In Irish, it is known as "Bóthar na Seanchille" ("the road of the old church").
Image Courtesy of Flickr and Neil Rickards.
Sight description based on Wikipedia.