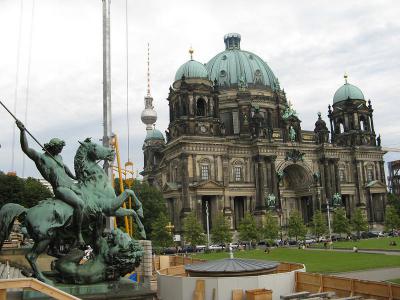 As such, Berlin Cathedral has never been a “cathedral” in the actual sense of the term, simply because Berlin itself has never been the seat of a Catholic bishop. Initially, this site was occupied by a Calvinist Supreme Parish Church built by Johann Boumann the Elder in 1747-1750. In 1893 that building was dismantled to make place for the current Supreme Parish and Cathedral Church. Commissioned to the project were father and son, Julius and Otto Raschdorff, who produced an exuberant Neo-Renaissance style edifice.

With no separation between Protestant church and the state of Prussia, King William II covered the entire construction cost of 11.5 million Marks. At 114 meters long, 73 meters wide and 116 meters tall, this was much larger than any other building previously raised in Berlin, and was considered a Protestant counterweight to St. Peter's Basilica in Vatican City. On February 27, 1905, the cathedral was inaugurated.

Why You Should Visit:
The view from the dome is great and worth the steps – little bit narrow at times, but there are banisters to hold on to.
Inside the Cathedral is awe-inspiring with a magnificent organ, spectacular acoustics, precious works of art and sublime atmosphere.

Tip:
For a few €s, the audio guide offers plenty of interesting information (alternately, get a printed guide for just a few cents).
Follow signs to walk around all the cathedral's halls and be sure to climb to the roof terrace and go down into the crypt.
In the winter, come around 3pm to get the best of both daylight and dusk; the night illumination is absolutely beautiful.
In the summer, there is a large open lawn with a fountain across the street that would be great for a picnic.