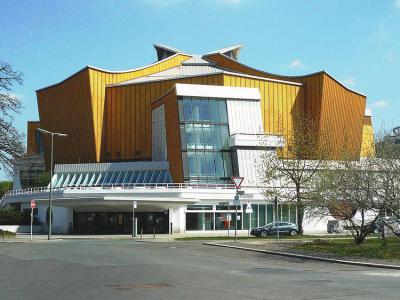 Part of Europe's cultural heritage, the Berliner Philharmonie allows you to see/hear pretty much the world's most famous orchestra and concert hall. Blessed with great conductors and musicians, characterized by unique, highly nuanced interpretations, the orchestra is stunning live. There are seats all around the stage, and the acoustics are just wonderful: you can hear every note, in a way you have not heard before.

The venue itself took three years to build (1960-63) and is regarded as one of the finest post-war architectural achievements in Europe. Based on a new concept for concert hall interiors, the experimental design by Hans Scharoun has placed the podium in the center of a pentagonal-shaped hall, with the public galleries merging into the perspective of the five corners.

The exterior of this amazing building reflects its interior, which was later gilded between 1978-81, and now has a strong golden appearance and a shape reminiscent of a circus tent. Adding to this the enthusiasm of 'music-loving' Berliners, going to a concert at the Philharmonie creates an experience that's impossible to forget!

Tip:
There are limited concerts, so plan ahead (note, however, the free lunchtime concerts on Tuesday in summertime).
As stated at the website, there is no dress code and it is mainly smart casual to dark suit.
Pre-order your intermission drinks or you will be waiting in line needlessly.
You can also attend guided tours of the venue before a concert in the evening.