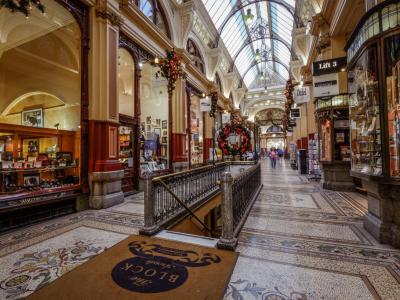 Block Arcade is, without a doubt, the swankiest and most beautiful stretch of Melbourne. It was opened in 1892 and features an over-the-top French Renaissance architecture that makes the spot memorable. It's full of tall arches, cornices, and lots of decorative tiles. The arcade is full of boutiques and tea rooms and was once the prime shopping district off of Collins Street.

The arcade is L-shaped, with a large domed rotunda on the corner. Entrances are located on Elizabeth Street and Collins Street. The Collins Street entrance is opposite the even older Royal Arcade.

The name comes from the fashionable practice of "doing the block." In the late 1800s, the city's elite would dress in their best and stroll Collins Street and the arcades. It was the spot in Melbourne to "see and be seen."

The Block Arcade is a popular tourist attraction since it boasts the city's finest Victorian architecture. Walking the arcade is a trip back in time. It's the perfect place to stroll, window shop, and maybe have a bite to eat. The arcade's entrances are six-story tall facades that are some of the best examples of the Mannerist style of Victorian architecture in the city. The arcade is listed on the Victorian Heritage Register.

If you want to live the Victorian way, you must take tea at the Hopetoun Tea Rooms. First opened in 1894, they were completely redecorated in 1976 in Victorian style. Still to this day, the rooms give you the feeling that they are intended for high society. This isn't your ordinary cup of tea!

You may also want to check out the Royal Arcade, right across from the Collins Street entrance of the Block Arcade. Also, Block Court is adjacent. It has an elaborate Art Deco interior. It's no longer an arcade with shopfronts but is worth checking out regardless.
Image by a.canvas.of.light on Flickr under Creative Commons License.