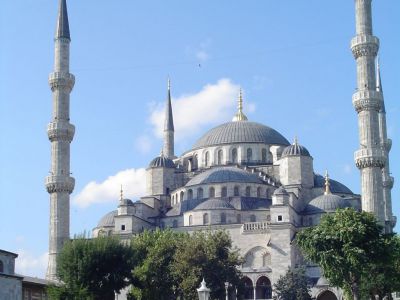 One of the most frequently visited and famous tourist spots in Istanbul, the Sultan Ahmed Mosque – popularly known as the “Blue Mosque” due to the blue tiles that adorn the walls of its interior – was built between 1609 and 1616 during the reign of Ahmed the First. It contains a tomb of the Sultan, a madrassah (religious school) and also a hospice. Despite being a very famous tourist attraction, it still functions as a mosque, and a call for prayer (azaan) still draws the faithful to its gates from far and wide. Usually accessible 24 hours a day, the mosque is not open for tourists during prayer time (which is approximately half an hour) five times a day, unless they are there to pray.

Built near the Hagia Sophia and surrounded by a popular tourist district, visitors to the mosque can enjoy several museums, cafes, restaurants and parks in the nearby vicinity. The mosque itself was originally built on the site of the ancient Byzantine Imperial Palace and Hippodrome and took nearly seven years to complete. This masterpiece of Ottoman architecture boasts many examples of Islamic Art and calligraphy that adorn its walls from the inside.

Why You Should Visit:
Compared to other mosques in Istanbul, this one is significantly easier to access because of its free admission and central location.
Timings are strict, a dress code is enforced and the queues are long, but the sense of tranquility that you get inside (even with crowds around) is worth it all.

Tip:
Go early to avoid queues and if you need to wait, look at the details rather than focus on the line. The details in Islamic architecture/design are what sets it apart.
Close by, there are places to eat and drink if you need sustenance after or before visiting.
You could also simply walk around it as much as you are allowed, and snap some pics.