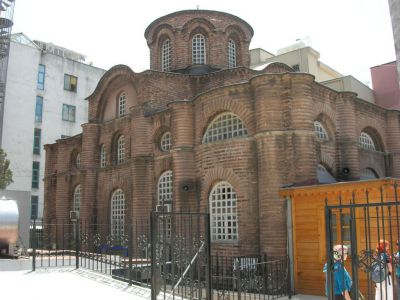 Formally known as “The Church of the Monastery of Myrelaion” or “The Place of Myrrah”, the Bodrum Mosque in Istanbul used to be a cross-in-square style church. The word “bodrum” translates from Turkish as “basement” and probably refers to the crypt that is still present underneath the building. In 1500, the site was made into a mosque by Ottoman Grand Vizier, Mesih Pasa.

The mosque was damaged by fire twice, in 1784 and 1911, and was also abandoned for some time, until the 1960s when the Istanbul Archaeology Museum undertook restoration works largely replacing most of the original elements with new masonry, thus causing the mosque to lose much of its historic appearance. A cistern, also restored during the 1990s, has been converted into an underground shopping mall.

The wooden portico once present inside has been demolished in the course of many renovation attempts. None of the original mosaics and marble revetments, that used to decorate the building, remain today and the mosque itself now stands surrounded with apartment blocks. Still, regardless of all these changes, the preserved crypt and the interior, dating back to the Byzantine period, are well worth a look.
Image by A. Fabbretti on Wikimedia under Creative Commons License.