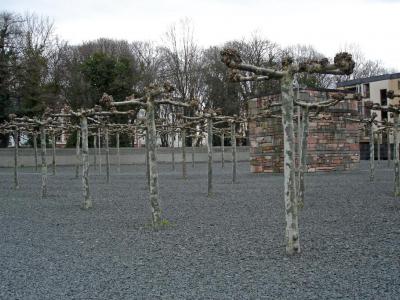 The Börneplatz Memorial commemorates the Jewish community of Frankfurt which was destroyed during the Holocaust. It was opened to the public on June 16, 1996.

The memorial consists of several elements: in the center of the square, on Rechneigrabenstrasse, is a stone cube which is made up of the remains of the foundations of the former ghetto. The cube is surrounded by a plane tree grove. The ground of the square is covered with gray gravel stones. The floor plan of the Börneplatz synagogue, built in 1882 and devastated during the November pogrom of 1938, is marked by metal rails on the floor. A memorial plaque for the destroyed synagogue was installed on the back wall of the municipal utilities building.

The center of the memorial is the frieze on the outer wall of the old Jewish cemetery, which commemorates Frankfurt Jews who were murdered during the Nazi era or died as a result of persecution. By the time the memorial was inaugurated, a total of 11,134 victims had been identified; their biographical data is engraved on metal blocks resembling gravestones. In keeping with the Jewish funeral rite, visitors to the memorial can place small stones here.

Other components of the memorial, designed by Wandel Lorch Architects, are reminiscent of the checkered history of the former Frankfurt Judengasse and Börneplatz, and the destruction of Jewish life in the city.
Image Courtesy of Wikimedia and dontworry.
Sight description based on Wikipedia.