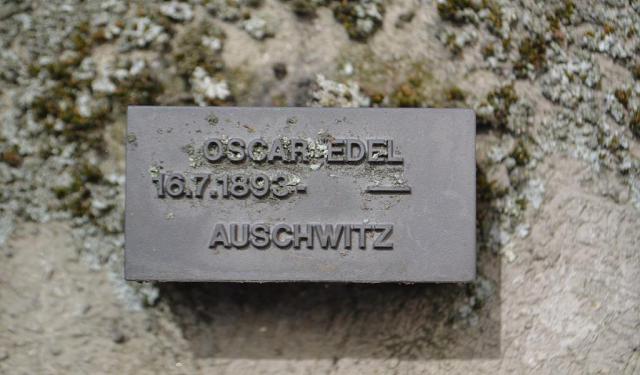 The continuous history of Jews in Frankfurt stretches back almost 900 years, which is more than in any other German city. For centuries, Jewish merchants, bankers, politicians, philanthropists, artists and scientists have made their living in the city prior to and after the dreadful period of the Nazi persecution in the 1930s-40s. If you're keen to explore some of the chapters of Frankfurt's Jewish heritage, take this self-guided walk.
Image Courtesy of Wikimedia and Karsten Ratzke.
How it works: Download the app "GPSmyCity: Walks in 1K+ Cities" from iTunes App Store or Google Play to your mobile phone or tablet. The app turns your mobile device into a personal tour guide and its built-in GPS navigation functions guide you from one tour stop to next. The app works offline, so no data plan is needed when traveling abroad.

At the end of the 1970s, head of the municipal cultural department initiated the project for a museum bank. A Jewish museum in the Rothschild Palais and an adjoining building on Untermainkai were approved by the city council in 1980. In the following years, a commission of historians had developed a concept for the museum that was to present the history of Frankfurt's Jews from the 12th century to 1945. Donations made it possible to create the basis for an own collection. The opening of the first Jewish Museum in the Federal Republic of Germany took place on the 50th anniversary of the November pogrom, on November 9, 1988, and was presided by Helmut Kohl.

Image Courtesy of Wikimedia and Mylius.
Sight description based on Wikipedia.
2

The Börneplatz Memorial commemorates the Jewish community of Frankfurt which was destroyed during the Holocaust. It was opened to the public on June 16, 1996.

The memorial consists of several elements: in the center of the square, on Rechneigrabenstrasse, is a stone cube which is made up of the remains of the foundations of the former ghetto. The cube is surrounded by a plane tree grove. The ground of the square is covered with gray gravel stones. The floor plan of the Börneplatz synagogue, built in 1882 and devastated during the November pogrom of 1938, is marked by metal rails on the floor. A memorial plaque for the destroyed synagogue was installed on the back wall of the municipal utilities building.

The center of the memorial is the frieze on the outer wall of the old Jewish cemetery, which commemorates Frankfurt Jews who were murdered during the Nazi era or died as a result of persecution. By the time the memorial was inaugurated, a total of 11,134 victims had been identified; their biographical data is engraved on metal blocks resembling gravestones. In keeping with the Jewish funeral rite, visitors to the memorial can place small stones here.

Other components of the memorial, designed by Wandel Lorch Architects, are reminiscent of the checkered history of the former Frankfurt Judengasse and Börneplatz, and the destruction of Jewish life in the city.


Image Courtesy of Wikimedia and dontworry.
Sight description based on Wikipedia.
3

The Judengasse Museum is a branch of the Jewish Museum in Frankfurt, and it was opened in 1992. The museum presents the history and culture of Frankfurt's Jews, from the Middle Ages to the emancipation, manifested in the foundations of five houses on Judengasse.

Frankfurter Judengasse was the first Jewish ghetto in Europe. It was built in 1460 by the old Hohenstaufen city wall; two years later, the Jewish residents of Frankfurt, who had previously lived in the immediate vicinity of the cathedral, were forced to resettle. The Judengasse developed over the centuries into a cultural center that was widely known for its scholarship, being visited by students from far and wide.

The ghetto was demolished in the 1870s, but the neighboring old Jewish cemetery was retained, even though no more funerals had been carried out there already. Immediately next to the cemetery, at the southern end of the former Judengasse, the Börneplatz synagogue was built in 1881/82. The latter was destroyed during the November pogrom of 1938. In 1942, the Nazi administration ordered to demolish the old Jewish cemetery, which was not fully implemented.

In 1987, during the construction of an administration building on Börneplatz, foundations of 19 houses on Judengasse were discovered – the largest archaeological find to date of a Jewish settlement from the early modern period in Europe. The discovery sparked a nationwide public debate on how to deal with this evidence of a suppressed Jewish history. While the city of Frankfurt endeavored to only document the remains and remove them to clear space for the new building, numerous protests were voiced against the removal as a "history disposal". At the end of the so-called Börneplatz conflict, which once again highlighted the strained German-Jewish relationship, a compromise was finally reached: five of the found house foundations were removed and rebuilt in the basement of the administration building at the original location.

In March 2016, the house was reopened with a newly designed exhibition.
Image Courtesy of Wikimedia and dontworry.
Sight description based on Wikipedia.
4

Battonnstrasse cemetery in Frankfurt is the second oldest Jewish burial sight in Germany; the first documented mention of it goes back to 1180. Throughout history, the size of the cemetery hasn't practically changed. The oldest surviving tombstone at Battonnstrasse is dated July 12, 1272, whereas many Frankfurt Jews – victims of the pogrom, known as the “Frankfurter Judenschlacht” – had found their final resting place here as early as 1241. The very last burial at the cemetery took place on September 16, 1828, after which it had to be closed, being overcrowded with nearly 6,500 graves.

Under the Nazi regime, in 1942, 4,666 gravestones were demolished and piled up as rubble for removal. Some of these stone heaps can still be seen today. 175 gravestones were removed, but not crushed, and ended up in the newer Jewish cemetery on Rat-Beil-Strasse. In the 1950s, they were returned, but because there was no information on their original location, they could only be placed along the cemetery wall.

The gravestones of important religious and secular personalities, such as Nathan ben Simeon ha-Kohen Adler, the Frankfurt chief rabbi Jakob Jehoschua Falk, Pinchas Ben Zwi Hirsch Ha-Levi or Meir ben Rabbi Yaakov Schiff, have been grouped together in a place of honor. The grave of Meir Anschel Rothschild, founder of the Rothschild banking house, is one of the most famous grave sites on the grounds.

The Battonnstrasse cemetery is permanently closed; those who wish to visit (except on Jewish holidays, Mondays and Saturdays), may obtain the key at the neighboring Museum Judengasse. For that, a deposit of a valid ID must be placed. Guided tours are offered every second Sunday, and can be booked by phone at the museum. Entrance to the cemetery is via gate on Battonnstrasse. Men are requested to wear a head cover (e.g. Kippa, which can be borrowed from the museum).
Image Courtesy of Wikimedia and Simsalabimbam.
Sight description based on Wikipedia.
5

No. 6 Friedberger Anlage is the former location of a Jewish synagogue in Frankfurt that was deliberately destroyed by the Nazis.

The synagogue was built from 1905 to 1907 and was characterized by the transition style of reform architecture with elements of Romanesque and Orientalism. On November 10, 1938, it fell victim to an arson organized by the Nazis as part of the November pogroms of 1938. The police ordered to demolish the building out of the risk of collapse. The destruction began on November 17, 1938 and was finished on June 12, 1939.

In 1942-43, a five-storey bunker was built on the site. While the surrounding Ostend district was badly damaged by air raids, the bunker remained intact. After the war, from 1947 to 1965, it had served as a book storage and university library, and then as a furniture store, from 1968 to 1988.

Since the early 1950s, the Jewish Restitution Successor Organization had demanded the removal of the bunker and restitution of the property. Eventually, it came into the possession of the Federal Finance Administration, upon which the city undertook to erect a permanent memorial for the synagogue. The Friedberger Anlage Synagogue Memorial Site, designed by landscape architect Jeannette Garnhartner, was finally erected in the forecourt of the bunker in 1988. The bunker itself now houses a permanent exhibition about Jewish life in Frankfurt's Ostend.
Image Courtesy of Wikimedia and Karsten Ratzke.
Sight description based on Wikipedia.