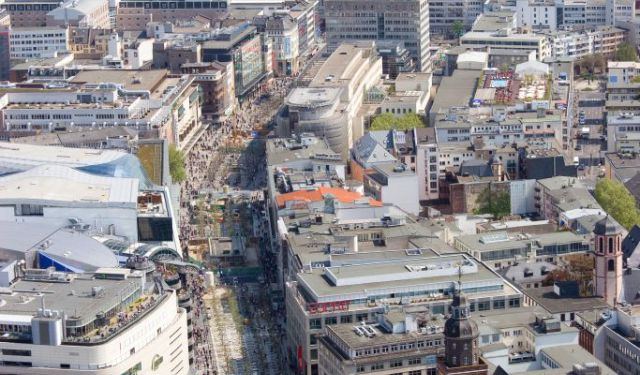 Image by Mylius on Wikimedia under Creative Commons License.

Frankfurt is an amazing shopping destination, it will impress any and all of its guests with its countless exquisite shops, shopping centers and shopping streets, selling just about anything. Take a walk with us today down Frankfurt's most famed shopping streets.
How it works: Download the app "GPSmyCity: Walks in 1K+ Cities" from iTunes App Store or Google Play to your mobile phone or tablet. The app turns your mobile device into a personal tour guide and its built-in GPS navigation functions guide you from one tour stop to next. The app works offline, so no data plan is needed when traveling abroad.

Münchener Straße runs parallel to the Kaiserstrasse, and is easily accessible by tram. High buildings have at their base many shops and restaurants. The street is dominated by international visitors who dine at cafés and restaurants. Small stores sell a wide range of products: including groceries, household equipment, electronics, and jewelry.
Image by Eva K. on Wikimedia under Creative Commons License.
2

Architecturally, the Kaiserstrasse is one of the last remaining avenues in Frankfurt. The historic houses date to the beginning of the 19th century, and visitors are constantly impressed with the ornate sandstone facades. The Kaiserstrasse also provides multi-purpose retail stores, an attractive weekly market, as well as sidewalk cafés and restaurants.
Image by Dontworry on Wikimedia under Creative Commons License.
3

Neue Kräme is a shopping street with centuries of tradition. In the Middle Ages, people sold glasses, dishes, and other household goods. Also, the Monastery Liebfrauenkirche provides a special oasis of peace and reflection by the busy shopping crowds in Neue Kräme.
Image by dontworry on Wikimedia under Creative Commons License.
4

The Tongesgasse is a shopping street in the old district of Frankfurt. In contrast to the Zeil, the Tongesgasseis does not offer inter-regional chain stores, but rather privately owned specialty stores. It's a nice place to spend an afternoon.
Image by Magadan on Wikimedia under Creative Commons License.
5

Once the center for large scale cattle trading, this old and busy shopping lane extends from the Konstablerwache Plaza to the Hauptwache Plaza in Frankfurt. The Zeil is a shoppers’ paradise where visitors with varied budgets can find a range of products from mid-priced supermarket fare to high-end brands.

The Zeil has been Frankfurt’s retail hub since the 14th century. The name Zeil comes from the German 'Zeile' that means row. At first, it meant a row of residential houses that later became the city’s popular marketplace. Before World War II the street had many grand buildings that were destroyed and subsequently restored.

Among the three major buildings located on the Zeil is the Zeilgalerie, a ten-storey shopping center with a unique spiral design (there are many music and electronic stores and restaurants in the building). Modern architecture and baroque are blended in another shopping center called the PalaisQuartier, which has a spectacular vortex-like glass façade, glass columns and irregularly shaped ramps. Finally – the 12-storey Beehive House, a commercial and office building which is also one of the Frankfurt’s early skyscrapers – is also located on the Zeil.

Visitors will enjoy the unique shopping experience offered by the shops at the Zeil. Products available include luxury items, designer brands, handicrafts, clothes designed by young Frankfurt designers, outlets of all major German retail chains and produce from the Frankfurt area.

Why You Should Visit:
Could be referred to as an "outdoor shopping mall", but it is so much more than that; it's the perfect place to acclimate to Europe if you arrive in Frankfurt, fun to shop, eat and explore while admiring its architecture. You don't need to worry about cars to cross the street – that's a bonus.


Image by Marcel Klinger on Wikimedia under Creative Commons License.
Sight description based on wikipedia
6

Despite nearly 40 shops and several dining facilities, Schiller Straße is one of the shortest shopping streets in Frankfurt. The major attraction at Schiller Straße is the weekly market, which takes place every Friday.
Image by Sebastian Kasten on Wikimedia under Creative Commons License.
7

The Goethe Street is Frankfurt's Fifth Avenue. Classy shops with the latest collections of top international designers. The range of designer clothing ranges from Armani to Versace. You can find here selected jewelry, representing exclusive brands such as Cartier and Tiffany. In addition, the nearly 400 meter long shopping street provides examples of transactions in the fields of art trade, household goods and eye wear.
Image by Eva K. on Wikimedia under Creative Commons License.
8

Freßgass (literally, "Grazing Street") is an upmarket shopping street in the city centre of Frankfurt, Germany, located in the district of Innenstadt and within the central business district known as the Bankenviertel. It is commonly regarded as Frankfurt's culinary main street. The street is a broad pedestrian zone, and located between Opernplatz (Opera Square) with the Alte Oper and the Börsenstraße (Stock Exchange Street) with the Frankfurt Stock Exchange. The street is also the direct continuation (in the western direction) of the Zeil, and is a parallel street of Goethestraße, one of Germany's busiest luxury shopping streets. Freßgass was originally an unofficial name, adopted around 1900 by its local population, for the streets Kalbächer Gasse and Große Bockenheimer Straße, because of their many high-end food shops, bakeries and butcheries, making it the most famous food shopping street serving the bourgeoisie of the Westend. Today the Freßgass is famous as the street where the bankers from the Bankenviertel meet for lunch. In 1977, the name Freßgass became an official name for the streets Kalbächer Gasse and Große Bockenheimer Straße. Since 1977, the Rheingau Wine Festival takes place annually during the late summer in Freßgass, showcasing wineries from Rheingau and Rheinhessen.
Image by Peng on Wikimedia under Creative Commons License.
Sight description based on wikipedia