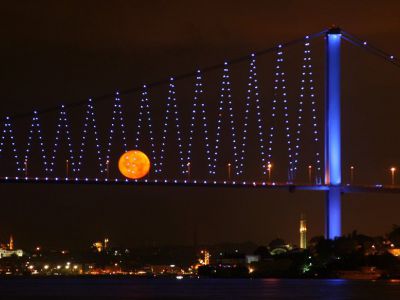 The modern and scenic Bosphorus Bridge links Asia and Europe across the Bosphorus Strait – one of the world's most important, strategic waterways – since its official opening in 1973, marking the 50th anniversary of the Republic of Turkey. Over 1,500 meters in length, it was at the time the 4th-longest suspension bridge in the world and cost over $200 million to build. Traffic has become so dense and communications between Asia and Europe so important, however, that the cost was recovered in less than 10 years.

Before this symbolically and economically important "First Bridge" – as it is also known – was built and designed by British civil engineers, everyone depended on ferry boats to go to the Asian side of the city. Today, around 180,000 vehicles pass daily in both directions, with almost 85% being cars. The only way for visitors to cross the bridge on foot is by participating in the 'fun run' held in October of each year.

In 2007, a computerized LED lighting system was installed to illuminate the bridge at night, now being used to create a colorful light show each evening. To get the best views, get on one of the various cruises that operate on the Bosphorous, allowing ample photo opportunities.

Tip:
Note that vehicle traffic is quite intense during rush hours, so whether you cross the bridge (by taxi or city bus) or get a view from afar, try doing so after dusk.
Image by Kara Sabahat on Wikimedia under Creative Commons License.