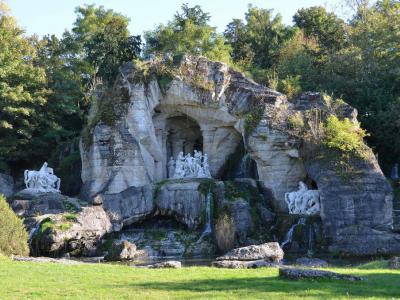 Created in 1670, this area of the garden has changed a number of times. It originally contained a rectangular pool surrounded by a turf border. Edging the pool were metal reeds and swan figures that each concealed numerous water jets. The center of the pool featured an iron tree that sprouted water from its branches, giving the area is name of the Bosquet du Chêne Vert. In 1705, it was destroyed and replaced by the Bosquet des Bains d’Apollon, which featured statues moved from the Grotte de Thétys. During the reign of Louis XVI, Hubert Robert remodeled the bosquet, creating a cave-like setting for the Marsy statues. The bosquet was then renamed the Grotte des Bains d’Apollon.
Image by koakoo on Wikimedia under Creative Commons License.
Sight description based on wikipedia