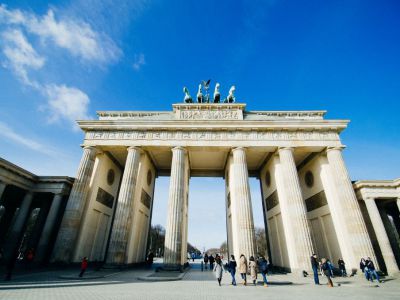 The only remaining city gate of a series that once surrounded Berlin back in the 18th century, the Brandenburg Gate (Brandenburger Tor) is one of the best-known landmarks of the German capital. It is found just one block south of the Reichstag and serves as a monumental entry to Unter den Linden, the renowned boulevard of linden trees that formerly led straight to the city palace of the Prussian monarchs.

The Gate survived World War II and was one of the few structures standing amid the ruins of Pariser Platz in 1945. Before the Berlin Wall was raised on August 13, 1961, cutting off access from West Berlin, vehicles and pedestrians could travel freely beneath the gate. During the Cold War era, up until 1989 when the Wall fell, the gate stood in no-man's land between East and West Germany as a defining symbol of Berlin – both, its division and unification.

If you come to the gate during the day, it'll most probably be extremely busy and you'll have to struggle to get the prominence of it amid an array of street vendors, beggars and tourists. Night is the best time to see it, probably, and to take some good shots, as it is beautifully lit up, glowing majestically, and not so crowded. Otherwise, you can simply stand at the base of the gate and then walk away, turning around and looking back for a long gaze... pausing for a thought about the gate's history.

Why You Should Visit:
Besides the photo-op, its historical significance alone should be enough a reason to visit.

Tip:
Go and see it after dusk as it looks particularly stunning when lit up.
Image by Ashwin Kumar on Flickr under Creative Commons License.
Sight description based on wikipedia