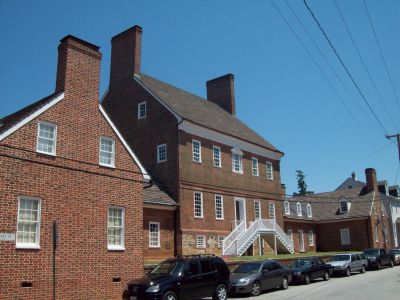 The Brice House is one of three similarly preserved 18th century Georgian style brick houses in Annapolis, along with the Hammond-Harwood House and the William Paca House. It is a five-part brick mansion with a large central block and flanking pavilions with connecting hyphens. Of the three, the Brice House's exterior is the most austere, giving its brickwork particular prominence. The interior is more richly detailed, and has been attributed to William Buckland.

The Brice house was built by James Brice, who served as Mayor of Annapolis and as acting Governor of Maryland in 1792. Archaeological excavations at the house in 1998 uncovered hoodoo caches, spiritual offerings placed by African-American slaves who were servants at the mansion.

The Brice House represents a simplified Georgian-style mansion that relies on its elevated site along a narrow street, its scale and the mass of its brickwork to make it one of the most impressive buildings of its style in the United States. In 1970, the property was declared a National Historic Landmark.
Image by Pubdog on Wikimedia under Creative Commons License.
Sight description based on wikipedia