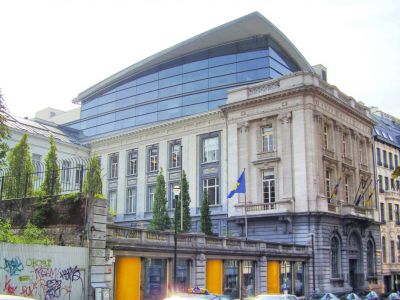 The so-called Regional or Brussels Parliament is a complex of buildings quite interesting from an architectural standpoint. While the vast majority of its structures date from the early 20th century, certain wings within the complex originated in the 17th century. The edifice features neoclassical style, with a very modern hemicycle (horse shoe-shaped debating chamber) on the top floor.

Originally, the Regional Parliament was sat at the Maes family mansion which was destroyed in 1695 during the bombardment of Brussels by the French troops of King Louis XIV. Whatever remained of the old mansion was bought by Count Charles van den Berghe who built a new mansion on the site with an enclosed courtyard and garden. This mansion was acquired by the authorities in 1823 to house the Brabant government and to serve as a home for the governor. Eventually, the mansion fell into disrepair and required serious modifications. In 1995, Brussels split off from Brabant province and created its own regional legislature, upon which the Federal state passed the building to Brussels to accommodate their parliament. Still, the building was found unsuitable for the purpose and subsequent renovations were made. In addition to those renovations, the local authorities commissioned eleven artists to embellish different parts of the building.

Tip:
Individual visitors are free to enter the parliamentary chambers during business hours, anytime without reservation. In the summer, you can start your visit at any time, while for the rest of the year visits are timed at certain hourly intervals. There are also docent-led tours of the place run at certain hours and, if you're really into the workings of the parliament, you can observe the live session on a first-come, first-served basis.