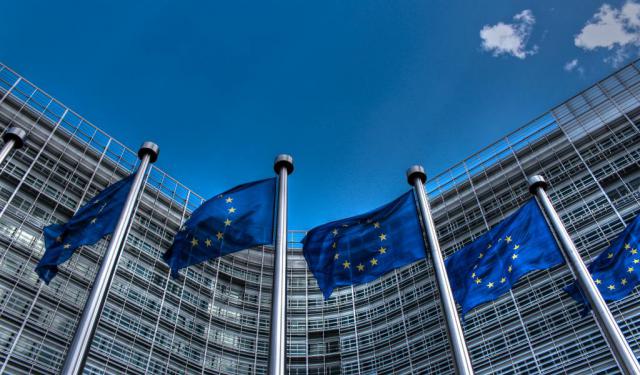 Begin your exploration with the EU’s most symbolic construction, the Berlaymont, a huge office building that was widely praised for its design – shaped like a giant cross of St Andrew – when it opened in 1967. After a refurbishment that took thirteen years, it reopened in 2004 and certainly looks even better as a home to the European Commission.

Not far away, the Charlemagne high-rise accommodates the rest of the Commission’s bureaucracy, while opposite, housing the Council of the EU, is the cream-colored Justus Lipsius building, constructed in the mid-1990s and linked via two skyways to the much newer Europa Building – seat of the European Council.

On rue Belliard, the low-rise Jacques Delors building houses the European Economic and Social Committee as well as the Committee of the Regions, while the European Parliament is at l’Espace Léopold. The latter’s curved glass roof, rising to 70 m (228 ft), can be seen from all around the district, and there are particularly pretty views from Parc Léopold at its eastern side.

Take this self-guided walking tour to discover Brussels’ European Quarter at your own pace.
Image Courtesy of Flickr and Thijs ter Haar.
How it works: Download the app "GPSmyCity: Walks in 1K+ Cities" from iTunes App Store or Google Play to your mobile phone or tablet. The app turns your mobile device into a personal tour guide and its built-in GPS navigation functions guide you from one tour stop to next. The app works offline, so no data plan is needed when traveling abroad.

The building now has 240,000 m² of floor space on 18 levels, connected by 42 lifts and 12 escalators. Offices for 3,000 officials and meeting rooms are in the tower. Restaurant and services, a 900-seat cafeteria, TV studio, conference rooms, storage rooms, Nordic sauna, car parking for over 1,100 vehicles and various services occupy the basement.

Image Courtesy of Flickr and Karen Eliot.
Sight description based on Wikipedia.
2

The Justus Lipsius building is a building in Brussels which has been the headquarters of the Council of the European Union since 1995. Like most government buildings in the EU district its architecture is very modern and functional. The building has a total surface of 215,000 m2 divided into three distinct: the Conference Centre, the Secretariat and the substructure. The building is named after Justus Lipsius, a Flemish philologist and humanist, who previously lent his name to a street that was removed to make way for the large complex.
Image Courtesy of Wikimedia and JLogan.
Sight description based on Wikipedia.
3

The Europa building is situated on the former site of the partially demolished and renovated Bloc A of the Residence Palace. Its exterior combines the listed Art Deco façade of the original 1920s building with the contemporary design of architect Philippe Samyn. The building is linked via two skyways and a service tunnel to the adjacent Justus Lipsius building, which provides for additional office space, meeting rooms and press facilities.

Image Courtesy of Wikimedia and Samynandpartners.
4

The building was designed by Jacques Cuisinier and constructed in 1967 at the same time as the Berlaymont Building to group together more scattered departments of the European Commission. However, with the Commission refusing to share the Berlaymont with the Council of the European Union, Charlemagne was given to the Council's secretariat in 1971.

The Council moved out to the Justus Lipsius building in 1995 allowing it to be renovated. The renovation was completed in 1998 by Helmut Jahn, replacing the largely concrete exterior with a glass one. After the restoration it was occupied by the Commission, further grouping the Union's offices around the Schuman roundabout.

Image Courtesy of Wikimedia and JLogan.
Sight description based on Wikipedia.
5

The 15-story Lex Building is a government office in the European Quarter of Brussels. The building was constructed over a two year period and completed in 2006. The facade is made of a glass curtain system. Prior to construction of the Lex, an old mansion on the site had to be demolished. Instead of trying to renovate or incorporate the old building, it was demolished in favor of starting with a blank slate and designing a building that could suit the end users needs more appropriately. The desire for additional government offices was driven by the fact that the European Union (EU) was expanded in based upon the Treaty of Accession 2003 with the Czech Republic, Estonia, Cyprus, Latvia, Lithuania, Hungary, Malta, Poland, Slovenia, and Slovakia.

The design for the building came out of an international competition, with Belgian architects Jasper-Eyers having the winning design. The design features two opposing shells. The building served as an annex to the Council of Ministers, which represents the Member States’ governments. Any acts that are relevant to the lives of EU citizens or have a large international impact are adopted by the Council, typically in conjunction with the European Parliament.
Image Courtesy of Wikimedia and JLogan.
Sight description based on Wikipedia.
6

The EESC is an assembly of employer organizations, trade unions and other representative groups of related interest. The EESC was established in 1957 under the Treaty of Rome, with the goal of establishing a single market out of differing economic interest groups. The EESC acts in a consultancy role, however, based upon provisions of the Treaty of Maastricht, the EESC has influence in the areas of social policy, environment, education, health, consumer protection and indirect taxation, among other areas. The EESC provides input on subjects relating to European integration and issues opinion papers on various topics.
Image Courtesy of Wikimedia and Jahoe.
Sight description based on Wikipedia.
7

The Espace Léopold is the complex of parliament buildings in Brussels housing the European Parliament, a legislative chamber of the European Union.

It consists of a number of buildings, primarily the oldest, the Paul-Henri Spaak building, which houses the debating chamber and the President's offices, and the Altiero Spinelli building which is the largest. The buildings are located in the European quarter in the east of Brussels, with building starting in 1989.

The complex is not the official seat of Parliament, which is the Immeuble Louise Weiss in Strasbourg, France, but as most of the other institutions of the European Union are in Brussels, Parliament built the Brussels complex to be closer to their activities. A majority of the Parliament's work is now geared to its Brussels site, but it is legally bound to keep Strasbourg as its official home.
Image Courtesy of Wikimedia and Oscar Franzén.
Sight description based on Wikipedia.