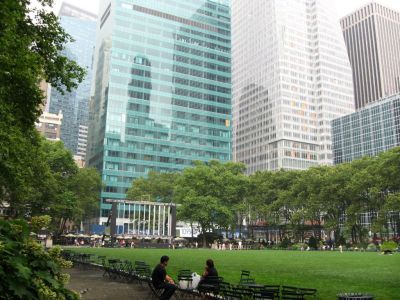 Bryant Park is an 8-acre public park right in front of the New York Public Library. The oasis of greenery in the very heart of the New York City, set amid the spectacular towering skyscrapers, such as the W.R. Grace building, the Bank of America and the Bryant Park Hotel, this is the place where New Yorkers and visitors love to come for lunch or just to stretch out and take it easy for a while.

The first park on this site was called Reservoir Square, named so after the adjacent Croton distributing reservoir. The square was the scene of the New York Draft Riots of July 1863 during the American Civil War. In 1884, it was renamed Bryant Park, after New York Evening Post editor and abolitionist William Cullen Bryant, whose statue now holds a prominent place in the park. In 1969, a large demonstration seeking to end the Vietnam War took place in the venue. The 1970s saw the park suffer from neglect, turning into a haven for drug dealers and the homeless.

In 1988, the privately funded Bryant Park Restoration Corporation took over the matter and the park was made into a safe and beautiful recreational area with movable chairs, chess tables and cafes. The park is a regular host of fashion shows, a summer film festival and has a popular ice skating rink in winter.
Image by Jim.henderson on Wikimedia under Creative Commons License.