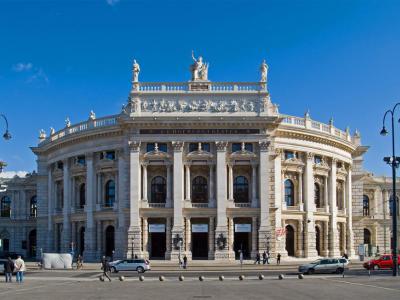 The Burgtheater or Court Theatre, commonly referred to by the locals as simply "die Burg", is a national theater of Austria. It opened doors for the first time on 14 March 1741, commissioned by Empress Maria Theresa, who was a noted patron of the arts.

Apart from the theater itself, the initial location on Ringstrasse, adjoining the Hofburg Imperial Palace, served as a home for the theatrical troupe. In 1888 the troupe moved to a new location, while the theater got itself a new, magnificent Italian Renaissance building, created by Karl von Hasenauer and Gottfried Semper. The building boasted a state-of-the-art revolving stage system, Europe’s largest, enabling sets to be changed in just 40 seconds, lending itself to practically any type of performance. 10 years later, though, because of the original design flaw – some of the seats had no view of the stage, the auditorium had to be completely remodeled. During World War II, the building was almost completely destroyed by a bomb – only the side wings, containing the imposing Grand Staircases, had survived. The entire central portion was rebuilt in 1952–55 and quite successfully, in fact, that today the extent of that restoration is very hard to notice.

Visitors to the theater are hailed by the emblems of music and the dramatic arts on the facade, along with the frieze depicting Bacchus, god of drama, accompanied by his wife Ariadne and an energetic entourage. Leading to the Burg’s 60-m (200-ft) curving foyer are the two elegant Grand Staircases, mirroring each other in the North and South wings, lined with the busts of playwrights and adorned with a series marvelous ceiling frescoes on theatrical themes painted in 1886 by Gustav and Ernst Klimt, and Franz Matsch. Among them, there is one painting by Gustav Klimt depicting Shakespeare’s Globe, featuring the only known self-portrait of the artist.

Why You Should Visit:
One of the most prestigious German-language theaters in the world, the Burg enjoys worldwide acclaim, staging a diverse range of plays, from ancient Greek tragedies to modern day classics by Arthur Miller. It is particularly renowned for their interpretation of German writers, composers and playwrights. Three of Mozart’s operas, including The Marriage of Figaro, as well as Beethoven’s 1st Symphony were premiered here. There is also a rather unique speech and style to the plays, typical of the Burgtheater, that has been created by the famed company over the years.

Tip:
Many a ticket can be purchased for as little as 25 Euros. If you call the day of the play, any leftover tickets may be on sale for up to 50% discount.
Daily guided tours (in German and English) allow visitors a glimpse into the inner workings of the theater.
Performances are in German, but selected shows are subtitled in English.