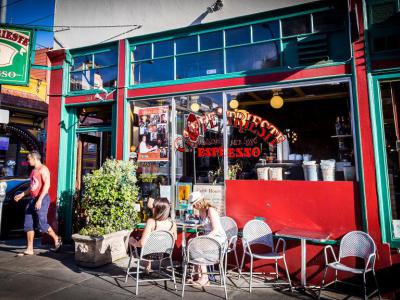 Caffè Trieste is an internationally known chain of four Italian-themed coffeehouses plus one retail store in the San Francisco and Monterey Bay Areas of California. Caffè Trieste was opened in 1956 by Giovanni Giotta (aka "Papa Gianni"), who in 1951 had emigrated to the United States from the small fishing town of Rovigno D'Istria, Croatia (before the World War II the region was part of Italy). Missing the espresso houses of Trieste, Italy, Giotta opened his own cafe. Caffè Trieste is said to be the first espresso house on the West Coast.

The original Caffè Trieste in San Francisco's North Beach quickly became popular among the neighborhood's primarily Italian residents. "It was all Italian people," Giotta said of the neighborhood, "But I got the American people to like cappuccino."

The Caffe has been featured in several movies, on television, radio, in magazines, and in dozens of photography, tourism and other books, ranging from local to national and international in scope. Francis Ford Coppola wrote much of the screenplay for The Godfather while sitting in the Caffè Trieste.

Opening Hours: 6:30 - 23:00 Daily
Image Courtesy of Flickr and Mobilus In Mobili.
Sight description based on Wikipedia.