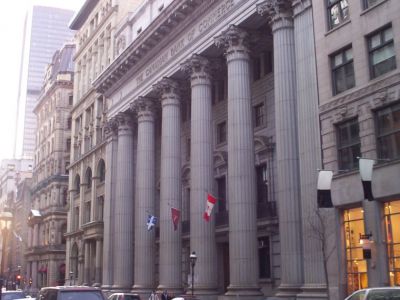 Canadian Imperial Bank of Commerce building in Montreal is a skyscraper with 45 stories. Also known as the CIBC Tower, this building is 187 meters high and was the tallest building in the entire Commonwealth of Nations between 1962 and 1963, after which the distinction was passed on to Place Ville-Marie. CIBC Tower was constructed by Ross, Peter Dickinson, Duschenes, Fish and Barrett to house many commercial establishments including the Canadian Imperial Bank of Commerce and Miller Thomson and Stikeman Elliott, the corporate law firms.

This building is opposite Sun Life Building, close to Dorchester Square. As you approach this building, the first thing you will notice is its slender shape. This is evident in the 1400 square meter gross floor area per level.

This international style tower has an impressive facade that is much more ornamental than other similar commercial buildings. You will be impressed by the glass strip curtain wall that alternates exquisitely with the green slate and other types of stones. Renovation of this building took place in 1991 and the CIBC logo, that finds a place at the top of it, was redesigned in 2004.

***The RMS Titanic Walking Tour***
The Montreal offices of the White Star Line were in the building from 1909 to 1939. It is where the tickets for the Titanic were sold.
Image by Colocho on Wikimedia under Creative Commons License.
Sight description based on wikipedia