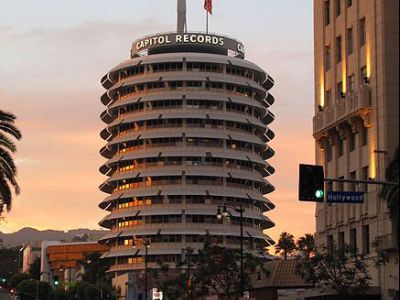 One of the most popular landmarks in Los Angeles is the Capitol Records Building on Vine Street. This is the home Capitol Records’ recording studios and echo chambers, and a Registered Historic landmark.

The building was designed in 1956 by Welton Beck, who rather shockingly at that time, flew in the face of superstition and gave it 13 storeys. It was the first circular office structure in the world, but Beck wasn’t too pleased when people said it looked like a stack of records with a gramophone needle at the top.

The “gramophone needle” is actually a slender spire with a light on top that flashes out the word “Hollywood” in Morse code. It was switched on by Samuel Morse’s granddaughter, Leila. The “stack of records” look is created by the curved awning over the windows on each floor.

The rectangular building at the base of the tower was added later and on the south wall is a wonderful mural, called Hollywood Jazz, depicting various artists, such as Nat King Cole and Billie Holiday. In front of the building are the Walk of Fame stars of some of the artists who recorded at Capitol Records, including John Lennon and the famous Country Music singer Garth Brooks.
Image by Downtowngal on Wikimedia under Creative Commons License.