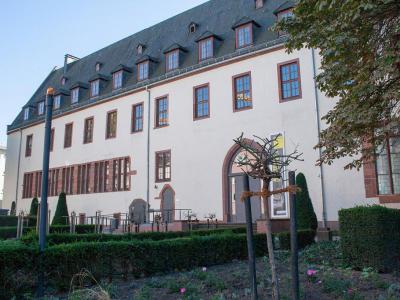 The former convent of the Carmelite order, from 1246 to 1803, Karmeliterkloster is the seat of the Institute for City History and the Archaeological Museum.

The Carmelites established themselves in Frankfurt in 1246. The monastery quickly gained momentum and became one of the largest building complexes in the Old Town. In 1424, their church was remodeled to the late Gothic style. To a single-vessel church the Carmelites then added a chapel and a two-aisle refectory hall. The latter was covered with frescoes, largest in Northern Europe, including painted history of the Carmelite order and a 16th century depiction of Christ’s birth and death by artist Jorg Ratgeb who was later cruelly executed for taking part in the German peasant’s revolution of 1525.

After the secularization of Frankfurt in 1803, all the monastery's possessions were claimed by the city, including 25 hectares of vineyards in Hochheim am Main. Over the years, the main building had served as a warehouse, garrison, fire department and a theater. It was almost completely destroyed during World War II and its frescoes were badly damaged. The building was finally refurbished in 1987-1989.

Since 1959, the Carmelite Monastery has housed the Institute for City History, which is the former municipal archives, as well as collections of the Museum of Prehistory and Early History (now the Archaeological Museum), featuring objects from the Stone Age and the Roman civilization period, plus the ones extracted from the Frankish and Alemanic graves. It is also home to a cabaret theater located in the basement, called Die Schmiere (The Grease), staging satirical plays and much loved by the local theater-goers.
Image by Szilas on Wikimedia under Creative Commons License.
Sight description based on wikipedia