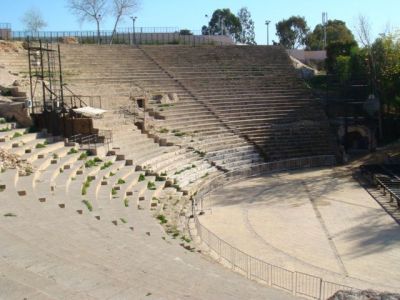 The Carthage Amphitheatre is a Roman venue constructed at the end of the 1st, beginning of the 2nd century AD. This is one of the three African amphitheatres built atop a flat ground rather than a hill; the other two being El Jem and Thapsus.

An inscription certifies that the amphitheatre had been in service from 133–139 AD. It was then expanded further, during the 3rd century, to earn great admiration from visitors, especially during the Middle Ages. Its total capacity was 30,000 seats.

Al-Bakri, an 11th-century Arab Andalusian historian and geographer of the Muslim West, in his account of the building described it as "the most wonderful in Carthage”. “This building is composed of a circle of arches supported by columns and topped by other things similar to the forefront arcades," he wrote. “On the walls of this building, we see pictures representing animals [...] can be distinguished figures that symbolize the winds: the East looks smiling, and the West has a frowning face.”

Another Medieval traveler, Arab Muslim geographer Al Idrissi, was also clearly impressed by the "circus building consisting of approximately fifty arches", saying, "at the top of each arch is another arch, and the arch of the lower arch. We see various figures carved in relief and curious representations of humans, animals, ships, all executed with infinite and immense skill".

Since the monument was raided by looters, the original stone and metal have been leveled to the ground. Thus, only the arena has survived till the turn of the 20th century, with a grove of pine trees in the middle. Later, the wall has been restored as well.

In 1887, a cross was erected in the center in memory of the martyrdom of Christians, namely Perpetua and Felicity, the two female saints of the Catholic Church.

Nowadays, the amphitheatre is still used for summer festivals.
Image Courtesy of Wikimedia and Shoestring.
Sight description based on Wikipedia.