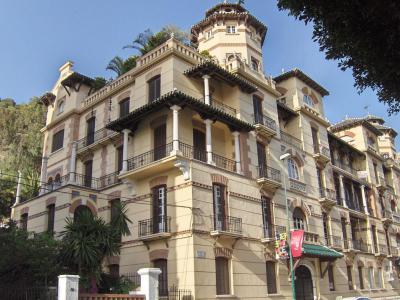 Behind the Bullring of Malagueta, on Paseo de Reding, on the left side, there are two notable buildings, called Casas de Félix Sáenz. These blocks of flats are named in memory of Felix Saenz, a major homeowner, who commissioned their construction in 1922. Intended for rental, these properties still serve in this capacity today.

The houses were designed by the architect Fernando Guerrero Strachan, and consist of three floors, plus basement and attic towers. The facades are articulated in recesses and projections, causing flown pavilions, terraces, balconies and glazing windows of different heights. This provides a wealth of color, accentuated in the early hours of morning and the afternoon.

The overall style is the so-called “Regionalist” of the Málaga-Este District, with the external decoration comprising Neo-Mudéjar and Neo-Renaissance elements, characteristic of the 1920s. The obscure Regionalism can be characterized as post-modern and has retained the elegance of the "Belle Époque" architectural forms, although stricter and without curved lines. Instead, multi-capacity, niches and balconies with tiled awnings are widely used. These elements, quite typical of Andalusian individual homes, are the hallmark of local Regionalism.
Image by Tyk on Wikimedia under Creative Commons License.