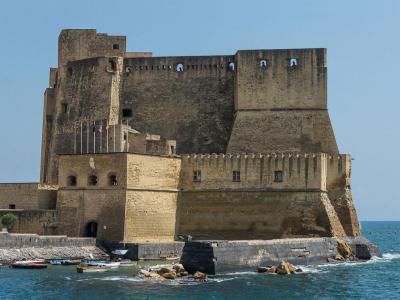 The Castel dell’Ovo or Egg Castle is a seaside castle in Naples, located on the former island of Megaride, now a peninsula, on the Gulf of Naples in Italy. The castle's name comes from a legend about the Roman poet Virgil, who had a reputation in the Middle Ages as a great sorcerer and predictor of the future. In the legend, Virgil put a magical egg into the foundations to support the fortifications. Had this egg been broken, the castle would have been destroyed and a series of disastrous events for Naples would have followed.

The Greeks from Cumae were the first inhabitants of the island and it was from the location of the fortress that they founded what later became the city of Naples. The present structure dates back to the 15th century and was built by the Aragonese rulers. It served both as a royal residence and the state treasury. A small fishing village grew around the Egg Castle in the 19th century and is well known today for its marina and seafood restaurants.

The castle's roof is beautifully paved with bricks, making an ideal platform for 360 views of the city, the Mediterranean, and Mount Vesuvius. The climb on foot is easy, via a wide, very gradually ascending thoroughfare. A few shops and one small art gallery occupy some castle space. There are myriad points for great scenic photos.

Tip:
Try to go towards the end of the day as the sun is setting, and be sure to bring a camera, binoculars, plus water! The castle is very close to the boat terminal and you can go back to Sorrento by boat if you stay there.